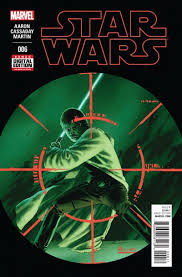 It continues where the last left off....Boba Fett has stunned Luke at Obi wans home on Tatooine and the 2 fight it out with Fett seemingly having the upper hand.

Cut to Han and leia who have landed their stolen Imperial shuttle on a planet that Han & Chewie have used as a smugglers hideout in the past. All of a sudden a mystery ship turns up on the scene!

Meanwhile back on Tatooine Luke and Boba are still going at it until Luke uses the force by accident to launch a box at Fett and knock him out. Still blinded by the stun grenade Artoo leads Luke out the house with the box that Obi-Wan left for Luke. 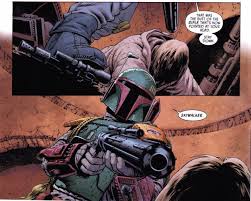 Leia and Hans bickering, come flirting is ongoing until a ship appears and Han tells Leia to run as the ship starts opening fire on them, it then lands and out of the ship steps a lady who announces herself as Sana Solo, Hans wife!!!

Luke opens the box he found in Ben's home and finds inside Ben's Journals.

Cut to Fett meeting with Vader on the bridge of his Star Destroyer, he announces to Vader that he found out the name of the boy who blew up the Death Star, Skywalker. Vader flies into a rage and the glass around him starts cracking!