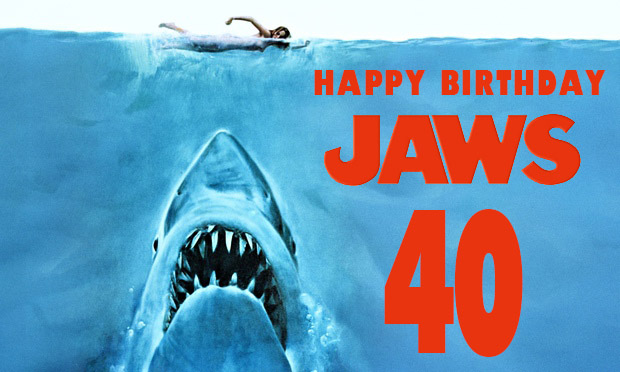 Jaws is one of my favourite movies, in my eyes a perfect movie and one of those rare occasions where the movie is better than the book.  Don’t get me wrong, Peter Benchley’s novel is good but the movie takes it to a whole different level and predictably is quite different to the book.  In the book Hooper and Brody’s wife have an affair, yep it’s true!  Unlike the movie the book has Brody and Hooper constantly bickering as Brody’s suspicions of Hooper having it away with his wife begin to be confirmed.  At one point Brody tries to strangle Hooper!

Now as I said I do like the book but with the constant bickering and love triangle I couldn't help feeling I wanted all of them to be eaten by the shark.  Now Spielberg who also thought the characters were unlike-able even after Benchley wrote numerous versions of the Jaws movie script he turned to Howard Sackler who really changed the whole script around and would be uncredited for his contribution.  Spielberg mentioned in the excellent Jaws The Inside Story doc that Sackler is responsible for bringing us the famous and iconic Indianapolis speech scene with Quint.  Robert Shaw trimmed it here and there and got it down to five pages but the original idea and script was Sackler's.   Sackler would go on to write the sequel Jaws 2 which was a worthy sequel, obviously not as good as Jaws but a good movie none the less.  Eventually the Jaws script fell to Carl Gottlieb who brought us roughly the script (minus a lot of ad-libs by the cast) to the classic movie we love today.

Jaws is classic Spielberg which is strange as it was one of his first movies.  Talk about hitting the ground (or water) running and what is strange too is Spielberg didn't want to do Jaws.  He’d already done a similar movie called Duel, made for TV and he was worried he would be typecast as a monster chasing movie director.  Well thankfully as we know he took the movie on and it’s classic Spielberg.

I don’t remember watching Jaws for the first time and I think the reason for this is I've re-watched the movie so many times I think that particular memory has been overwritten with watching Jaws a hundred plus times in my life and I never grow old of it.  It’s become a comfort blanket for me.  I was too young to have seen jaws in the cinema the first time it graced the UK cinemas.  My first memory of Jaws is actually a funny one.  I must have been around five years old when Jaws came to our neck of the woods in South Wales.  As mentioned I was too young to have been allowed to see Jaws in the cinema and for that matter my older brother was too.  My parents were deeply religious and I do remember my brother being told he wasn't allowed to see Jaws.   He would have been around 12 years old at the time and being a lad around that age he didn't listen to my parents and one day he quietly left with his friends to see the Spielberg directed movie.  Well, somehow my parents got wind he had been and I remember the uproar in the house and the telling off my brother got for seeing Jaws.  Why would you want to see a movie with so much violence, severed heads, legs and bodies everywhere were my parent’s questions?  How they knew that I do not know unless they had seen it.  After his roasting I remember thinking for a long time afterwards I must see this movie.  The roasting and morale lecture my parents gave just had the reverse effect on me and I became more curious of the movie.

Eventually when I did watch Jaws I was blown away (and scared) by what I just watched.  I wanted to find out more about this movie and who was behind this masterpiece.  I didn’t know who Spielberg was at the time but it wasn’t long before I was watching Close Encounters and Duel and realised Spielberg was the name in the credits for all three.  I was hooked and became a fan from that point on.

I remember watching Star Wars in 77 and one thing I was struck by, apart from the movie was the soundtrack.  From that moment on I was a John Williams fan wearing out my Star Wars LP on my portable record player and Jaws was no exception.  I remember thinking this score is amazing.  I do recall having an assignment for English class in school and I decided to write about movie music.  I remember to this day wheeling in a large TV and video player into the classroom.  I played a scene from Jaws with no sound.  Then played the same scene with the now famous John Williams score playing and telling the class how important music and in particular a good soundtrack is to a movie.  How it transformed the scene.  I said you should never notice the music but instead should be an integral part of the movie and increase your emotions to each scene.  John Williams is a master at this and his simple signature tune is only played when the shark is present or nearby.  I love the the scene in Jaws when a boy ties a fin to his back and causes a panic.  You don’t hear the tune.   Minutes later you do hear the tune and you know the shark is really here this time.  Simple and very clever.  My first record with the Jaws theme on was not actually John Williams but Geoff Love and his Orchestra.  The album was called Big Terror themes and the shark from Jaws featured prominently on the cover.  It was one of my favourite albums as a kid.

It was only the other day was I watching Jaws for the umpteenth time and thinking to myself, this movie has not aged.  I asked my wife when do you think this movie was made?  Rachel, who is not into movies as much as me said “around 85?”  When I told her it was released in 1975 she couldn’t believe it.  Yes you have the 70’s fashion but the overall look of the movie is ageless and that is a sign of a classic movie.

I am so glad that shark didn’t work properly.  Would we be here now talking about Jaws if it did?  Who knows?  Spielberg is a clever director so there is a chance we would still think Jaws is a good movie but maybe not a classic.

I love all the characters in the movie and this is down to the perfect casting.  Shaw, Dreyfuss and Schneider all fit their characters perfectly and the on screen chemistry is first class.  Even the background characters all have their own personality, which is worth noting Spielberg insisted they are all played by locals of Martha’s Vineyard.  A genius move.  Talking of locals though I will say there are a couple of funny blooper in the movie.  Grab your Blu-ray and check this out.  17 minutes and 33 seconds in, just after the famous Brody, focus in scene, all the locals are panicking on the beach having seen that little boy getting chomped by Bruce you see one of the extras running in the foreground laughing his head off.  He’s wearing a white hat, sun glasses and has a moustache.  Check it out.  Makes me smile every time.  Also one last blooper, check out the person in the window with a camera taking a photo of the movie being made when Brody put his supplies he just bought at the shop on the front seat of the jeep.  Around 11 minutes in.

Jaws will always be part of me, it was one of those movies that made me a movie geek I am today.  Not a day goes by I don’t hum a part of the John Williams score.  I get asked that difficult question by people, what’s your favourite movie?  I tell them it’s like asking what’s your favourite food?  It depends what mood you’re in.  Sometimes I fancy a curry, sometimes I fancy fish and chips.  It depends what mood I’m in but when it comes to movies, three always comes to mind.  Close Encounters, Raiders of the Lost Ark and of course Jaws.  All Spielberg, all John Williams.  I thank Jaws for making the first and everlasting impression.  For me Jaws is a perfect movie, a timeless classic.  So next time someone asks you name a movie better than a book.  Jaws should be considered.

Now let’s have one more drink and go down and cut that shark open.