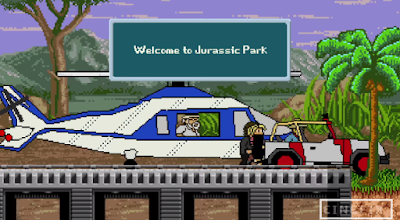 We’re guessing the excitement for Jurassic World has gotten you nostalgic for the original Jurassic Park, right? Why not also indulge your nostalgia for old-school video games at the same time? Jurassic Park was on the cutting edge of CGI back in 1993… we give the dinosaurs a treatment that’s a little less ahead of its time.
Thus, we present Jurassic Park in the form of an 8 bit video game!
8-bit Cinema "gamifies" your favorite Hollywood Blockbusters into 80's arcade and NES inspired action!
8 Bit a.k.a. the third generation of gaming started in 1983 with the Japanese release of the Nintendo Family Computer and Sega. Can you guess what games inspired our 8-bit version of Jurassic Park? Comment below and suggest the next movie 8-bit Cinema should "gamify".
Watch more 8-bit Cinema here: http://goo.gl/kOxFJ