But that's not a bad thing.  If it's done right then a good monster movie can be hugely entertaining.  If done bad then, well we're left with a Mega Shark Vs Gino Dino or whatever they're called these days.  Thankfully Jurassic World falls into the good monster movie camp quite easily.

Using another quote from Steven Spielberg regarding Jurassic Park he said he wanted to make the perfect popcorn movie and we can all agree that Jurassic Park was most definitely that.  Jurassic World, 22 years later continues that trend.

Colin Trevorrow is the director this time and admitted while filming Jurassic World that he felt a lot of pressure to make sure the film delivers and doesn't disappoint fans of the original.  Most fans felt let down by the two other attempts at a sequel, especially the third one.  With none of the original cast returning to Trevorrow's film (except for B.D. Wong as Dr Henry Wu) a lot of fans felt that Jurassic World would need to be something special to deliver and have been waving red flags for some time.  Well it does deliver and in fact I would go as far to say that this is the second best Jurassic Park movie behind the original film.

The movie delivers in all departments.  It's fun and beautifully shot.  The pace of the movie is perfect as it bursts with energy and action, stopping for small respites just for you to catch your breath.  Trevorrow has directed a wonderful movie and along with co-writers Derek Connolly, Rick Jaffa and Amanda Silver they have brought Jurassic Park into the 21st century but not forgotten it's routes.  It feels like a Jurassic Park film, especially as we return to the island of Isla Nublar.  The new resort for tourists looks fantastic and sleek, especially in 3D (although some swooping camera shots over the resort did make them look tiny and model like.) 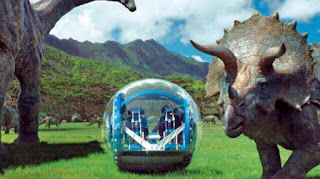 There are roughly twenty thousand visitors on the park with most of the attractions around the island being tightly controlled by a group of I.T. boffins in a control room that wouldn't look out of place in War Games or Agents of SHIELD.  They've spared no expense with holographic dinosaurs in the museums and cool looking glass type Gyro Spheres which you hop into and drive around the many plains observing the dinosaurs without any obstruction to your view.  The whole park feels like Apple have lent a helping hand and made everything sleeker than a velociraptor's tail.

All this is made possible by Irrfan Khan's character who plays the eighth richest man in the world, billionaire CEO Simon Masrani.  He's the John Hammond of the film.  Simon has many ideas and a romantic look on life but unfortunately without seeing the dangers right in front of him.  He leaves the every day running up to Bryce Dallas Howard's Claire Dearing who really only wants to make sure the approval ratings are up and, more importantly that the park is making profits...big profits.

So, it seems that normal "everyday" dinosaurs are no longer profitable.  As they state in the film, kids look at a stegosaurus these days as if it's a cow.  So to maintain profits they decide the best course of action is to make their own dinosaur by splicing bits of dino DNA together to create a super monster.  And this is why this is a monster movie and not a dinosaur movie.  Although there are dinosaurs in the movie, the main bad guy is this new hybrid called the Indominus Rex.  It's big, really big and worryingly very clever.  Velociraptor clever.  The bigger and better the "dinosaur" the better the profits.  But as you can guess this only spells disaster and eventually our old Indominus fella escapes and kills everything in it's rather large path.  Clare calls in Owen Grady who is played by Chris Pratt.  A bad-ass ex navy seal who now trains raptors.  Yes you read that right.  He's the alpha male in a pack of raptors and has kind of gained the trust of these raptors.  Something that Ingen has taken a huge interest in and can see potential to weaponize a raptor.

Anyway, Owen Grady is called in to save the day and to pick up Clare's nephews  (Nick Robinson and Ty Simpkins) along the way who happen to be VIP visitors to the park.  Inevitably, the two kids get lost in the middle of the island.  Grady along with Clare Dearing who turns from a pencil pushing, smart phone hugging business woman to a Ripley-style action hero by the mid way point of the movie go out to find the kids and also prevent this hybrid monster from attacking the main tourist complex. 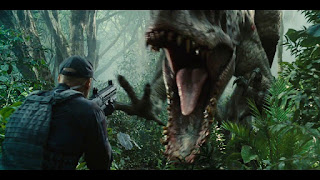 Here's where the movie really comes into it's own and the sense of threat from this monster is well presented although I did feel sorry for the first band of employees who were ordered to stop the Indominus Rex with non-lethal weapons.  A bad day in work is assured.

There's a nice tip of the hat to the original Jurassic Park as we get to see the original complex from the 1993 movie and in particular where the end scene took place.  I won't spoil it but it will definitely make you smile if you're a fan of the original. 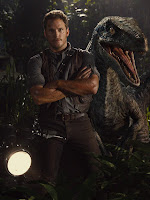 Chris Pratt for me is the stand out performance in the movie.  Even though Bryce Dallas Howard plays a fine part, it's Pratt's on screen presence that makes his character the main event in the movie, even more so than the Indominus Rex.  His dry wit and timing is second to none and I can easily see him as a future Indiana Jones.  His bond with the raptors makes the movie unique in the Jurassic Park franchise and this I would like to see more of in future movies.

The two nephews as mentioned were played by Nick Robinson and Ty Simpkins and although their performances are good, their characters feel a little unbelievable.  I really can't believe that even the most bored, love sick hormone crazy teenager would find a park with a T-Rex chomping down a goat to be boring and lame.  It felt like the two kids were not as believable as Tim and Lex in Spielberg's classic.

The use of CGI in modern day movies is always one of debate and lets not beat around the triceratops here.  This is a CGI heavy movie with only one dinosaur in the whole movie being animatronic.  But it doesn't matter.  The CGI is not over done and as mentioned right at the beginning of this review the movie looks beautiful.  The 3D is done really well and this is one of those rare films I would recommend to watch in 3D.  It's not in your face but adds a good depth of field to the whole movie, especially the helicopter flying over the island.

It's a shame that Colin Trevorrow has said he will not return for the next Jurassic World because he's done a wonderful job and proven himself as a director that can take on big name movie projects.  His pacing is spot on and even the end scene is just the right length.  It's not over long which is another bad habit of modern action movies.

The ending is satisfying and the conclusion to the movie obviously leaves the door open or should I say the island available for more Jurassic World movies.  With the Ingen threat and interest in weaponizing dinosaurs touched on in the movie I think this is probably the next path we will see Jurassic World heading.

Go see it.  It's good.  Pratt is superb, the dinosaurs and monsters are bigger, louder and smarter than before.  It's a perfect popcorn monster movie.  It feels like they spared no expense on Jurassic World.  Well done Colin.

I take a look back at Jurassic Park.