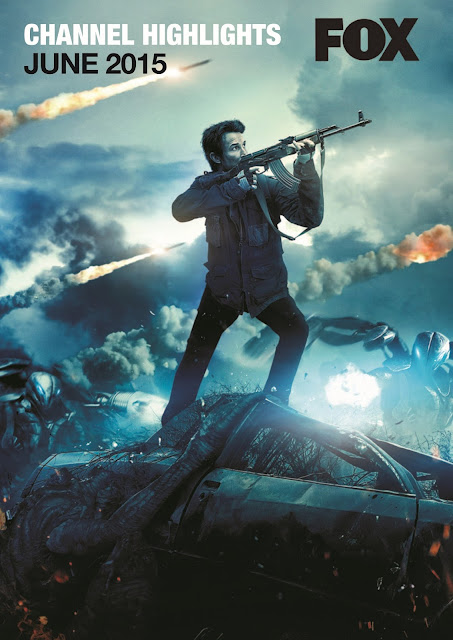 Today I was sent the latest highlights for the Fox Channel in the UK.  The headline act?  Falling Skies which returns for the final season on 30th June 9pm only on Fox.

Here's what they have to say about the final season in the press release and the picture above was also taken from the same press release:

Express from the US, we have the fifth and final season of Steven Spielberg’s sci-fi smash hit Falling Skies – premiering just two days later! It’s time to return to the 2nd Mass, led by Tom Mason (Noah Wyle – ER), as they fight for survival in a post-apocalyptic, alien infested world.

Last season Tom and Lexi commandeered a crashed Beamer and travelled into space to destroy the Espheni once and for all. After Tom killed Scorch, Lexi manually piloted his Beamer and drove it straight into the Espheni Power Core, sacrificing herself and finally showing her true allegiance to the human resistance. Back on Earth, the new instant-attach harnesses and all Espheni technology lost power after the destruction of their core. However, the explosion blast spun Tom deeper into space and when he woke up we caught a glimpse of a new alien, one that Tom seemingly knew…

Who are these new aliens? Are they the Great Enemy that forced the Espheni out of their own Galaxy? Will the 2nd Mass capitalise on the vulnerable, powerless aliens left on Earth and launch an offensive attack? Will they once and for all reclaim Earth? It’s all ready to be revealed in the brand new and final season of Falling Skies, First on FOX.