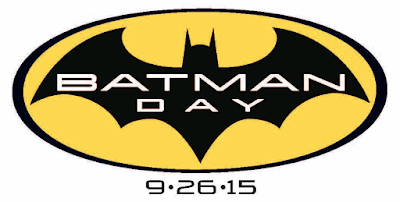 DC ENTERTAINMENT ANNOUNCES THAT ON SEPTEMBER 26:

Back By Popular Demand, BATMAN DAY 2015 Makes the Celebration of
The World’s Most Popular Super Hero and Global Pop Culture Icon an Annual Event

Burbank, CA (June 16, 2015) -- DC Entertainment is bringing back the fan-favorite event celebrating The Dark Knight. “Batman Day” is back by popular demand and will take place on Saturday, September 26, 2015, kicking off what has become an annual event honoring one of the most popular and iconic Super Heroes and celebrating all things Batman from comics to video games and more. Fans everywhere are invited to partake in festivities with thousands of comic book shops, bookstores, schools, libraries and other retail partners participating in the bat-centric event.
Those who visit select comic stores, libraries and bookstores on “Batman Day” will also have the opportunity for meet-and-greets with premier DC Entertainment talent including legendary artist and DCE Co-Publisher Jim Lee, Grant Morrison, Scott Snyder, David Finch, Brian Azzarello, Cameron Stewart, Pat Gleason, Dustin Nguyen, Tim Seeley, Tom King, Dan Jurgens, Jeff Parker, Matthew Manning, and Daniel Wallace with many more to be announced.
In addition to DC Entertainment, “Batman Day” partners include Warner Bros. Consumer Products with licensees Capstone, Penguin Random House, Scholastic, and DK Publishing, as well as Warner Bros. Interactive Entertainment and Warner Bros. Television, with additional partners to be announced. Partners will provide unique retail and digital promotional tie-ins across multiple media to celebrate the Caped Crusader.
The Bearded Trio - The Site For Steven Spielberg, George Lucas and John Williams
THE BEARDED TRIO ON FACEBOOK
THE BEARDED TRIO ON TWITTER
THE BEARDED TRIO ON GOOGLE+
THE BEARDED TRIO ON PINTEREST
CLICK HERE FOR FACTS ON STEVEN SPIELBERG
CLICK HERE FOR FACTS ON GEORGE LUCAS
CLICK HERE FOR FACTS ON JOHN WILLIAMS