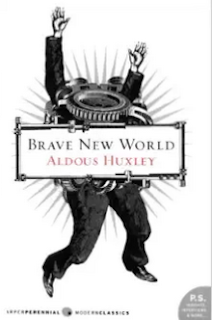 The SyFy Channel has announced they are working with Steven Spielberg’s Amblin Television for a Brave New World TV series, based on Aldous Huxley‘s 1932 dystopian sci-fi classic of the same name.  This will see the channel re-teaming with Spielberg's Amblin.  The first time being back in 2003 with the excellent UFO heavy, Taken which won an Emmy for best miniseries.

“Brave New World is one of the most influential genre classics of all time. Its provocative vision of a future gone awry remains as powerful and as timeless as ever. Promising to be a monumental television event, Brave New World is precisely the groundbreaking programming that is becoming the hallmark of Syfy.”

What is Brave New World about?  Here's Amazon's description:

“Community, Identity, Stability” is the motto of Aldous Huxley’s utopian World State. Here everyone consumes daily grams of soma, to fight depression, babies are born in laboratories, and the most popular form of entertainment is a “Feelie,” a movie that stimulates the senses of sight, hearing, and touch. Though there is no violence and everyone is provided for, Bernard Marx feels something is missing and senses his relationship with a young women has the potential to be much more than the confines of their existence allow.