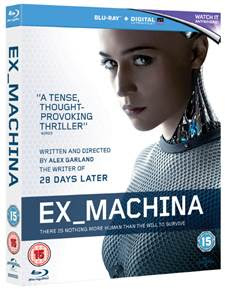 Plot
24 year old coder Caleb Smith (Domhnall Gleeson), who works at the world’s largest internet company, can hardly believe his luck when he wins a competition through work to spend a week at a private mountain retreat with his CEO Nathan Bateman (Oscar Isaac). Caleb arrives at the remote location and is eerily forced to sign an NDA to take part in the week-long project with the reclusive Nathan. The project is revealed to be a strange and fascinating experiment, where Caleb must interact with the world’s first true artificial intelligence, housed in the body of a beautiful robot girl (Alicia Vikander) to test if she can pass as human.

Review
Alex Garland, whose writing credits includes The Beach, Never Let Me Go and Dredd, steps up to the director's chair for the first time with an equally claustrophobic theme in Ex_Machina.  A movie that centres around one location (mainly underground) and just three main characters throughout the movie.  Couple that with camera angles that rarely reveal much, creating the illusion that there just isn't enough room to breath.  It's not until the director gives you a break by showing the outside environment do you feel free again, in a setting which wouldn't look out of place in the game Skyrim.  Flowing rivers, waterfalls, ice and trees as far as the eye can see are a welcome break from the subterranean house in which we spend the majority of our 108 minute stay.

Owned by reclusive billionaire and tech genius, Nathan Bateman, who owns not only the house and the underground facility but also the surrounding area which, as we find out at the beginning, goes on for two hours by helicopter.  It really is isolated.  Caleb Smith, "winner" of a competition is dropped off outside the building and this is where the intrigue of the film begins and never leaves.  His job is to take the "Turin test" which determines if a new and sexy piece of AI has consciousness.  When Caleb meets this "machine" he is shocked and amazed to find the AI is in female form and talks like any normal human.

The designers of Ava (our female AI) have done a remarkable job of creating her, making her look sexy, real and more importantly feasible in a fast moving technological world that we live in.  The designers were told not to look at any pictures of robots and to come up with their own design.  Finding inspiration from modern day cutting edge technology such as a suspension on a formula one car they have produced a look that, after a while you enables you to see past the technology and start looking at Ava as a real person, even when you can see the moving parts through a carbon style mesh that becomes more visible from certain angles and lighting.  Very clever. 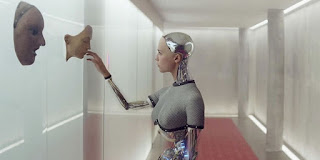 The movie could have easily felt like a Twilight Zone episode, given it's low budget but it certainly doesn't look or feel like any TV show or low budget movie.  It even tackles the subject matter better than the classic Star Trek The Next Generation episode, Measure of a Man, where Data is put on trial to see if he has the same rights as a human.  The movie oozes style and even though the movie is centred around one location it never becomes dull to watch.  Each room is as intriguing as the last and if you love your gadgets you are going to love this film.

The movie never dips and has a gripping pace to the whole affair.  You can't help but wonder what is going to happen on the next day of Caleb's stay.  More questions are raised at the end of each day leaving you with a sense of intrigue not felt since the first season of Lost.  Is Nathan about to find out what is really happening between Ava and Caleb?  What/who is Ava really and what are her real feelings? (if any.)  What is happening to Caleb and will he keep it together?  And what is happening with all these power cuts? 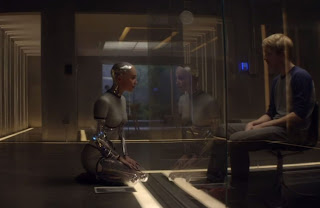 As mentioned the movie has a closed in feel and isolation is always present.  This is reflected in the story.  Ava is locked away. The only contact is occasionally Nathan and Caleb who sits behind a glass panel interviewing her in the same style as Jodie Foster's character in Silence of the Lambs.  Caleb soon realises that Ava is more than machine and his feelings for this beautiful female AI soon overtake his logical questions.

Ava's beauty is no coincidence which is explained in the film, with Nathan purposely using an image that suits Caleb's preferences when it comes to women.  This is one of the movies wonderful plot points.  Is Ava more than a play thing?  Is she to be taken seriously in a male world dominated by lust and fantasy.  Can we see past these things and truly take her for a living being?  The movie addresses these moral questions wonderfully, but the use of too much nudity with lingering camera shots sometimes make the moral message it is trying to convey a little ironic.

Even so the movie is essential viewing for any movie fan and especially a sci-fi fan.  I couldn't help think while watching the movie that I was watching a spin off movie of Steven Spielberg's A.I.  Perhaps a prequel to the Kubrick/Spielberg collaboration.  It fits in perfectly.

This is an impressive directing debut for Alex Garland and I strongly believe he is a name to watch.  Ex_Machina is a perfect example of a movie that doesn't need to rely heavily on special effects (even though they are there) and a big budget.  It's just a gripping story, perfect casting and a director that brings the story, acting and locations to life.  It's guaranteed repeat watching and a movie I believe will gain a cult status in years to come.  Perhaps in twenty years we will be re-watching Ex_Machina with our AI partner and chuckle.  Maybe. 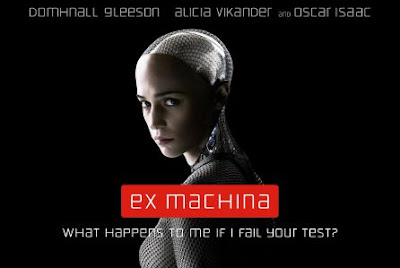