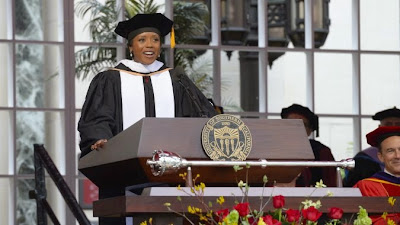 Watch Mellody Hobson's speech at the University of Southern California graduation where she calls for more tolerance and courage.  She also mentions her 'soulmate' and husband, George Lucas who was in the audience no doubt listening with pride to his talented wife.

"I hope we can be better at judging people not on their assumptions and appearances, but on their achievements and actions.  Just as I told you that you can be or do anything, I want you to believe that that's true of everyone and anyone. … It's so easy to get trapped in a self-selected subset of humanity. Yes, it feels comfortable, but it's also extraordinarily confining. There's a whole world out there — why limit ourselves? ... Do more that just accept diversity; seek out diversity. I promise you it will make you more interesting and, basically, smarter."

As mentioned, George Lucas sat in the audience with DreamWorks CEO Jeffrey Katzenberg where he listened to his wife offer three goal-reaching equations that "even the students who took the selfie class will understand what I'm talking about."

First, "hard work plus bravery equals success," she said. "Don't pretend that you know more than you do. … At the same time, don't pretend to know less than you do either. ... I know this can be very hard for women and minorities desperate to fit in. ... A better attitude is, 'This is who I am and I have value, and if you don't like it, that's fine, but this is who I am.'"

Second, "imagination plus bravery equals creativity," as she said the arts "are near and dear to my near and dear," Lucas. "Stories serve an essential purpose in our communities and our lives. ... [Star Wars] told a story about a choice between being selfish and being compassionate."

And third, "love plus bravery equals happiness. Other commencement speakers will tell you to be passionate about something; I'm telling you to be passionate about someone. ... It took me a long time to be as brave in my personal life as I was in my professional life, and that’s because to be brave in love means opening yourself up to the possibility of heartbreak. ... Then I met George. People talk about soulmates; I met my mind's friend. And since I always trust my mind when it told me to leap, so did my heart."