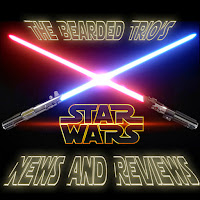 SPOILERS!!!
Boba fett is alive and kicking.....literally in this instance. Maybe indicating what kathleen kennedy said during the week, that he won't be kicked out of a galaxy far far away anytime soon!
So we start off with a young Luke Skywalker landing his X-Wing on Tatooine with R2 in tow and looking for 'Bens' house.

Unbeknown to him a certain Mandalorian Bounty Hunter is there too, looking for him on the orders of Vader! Fett even pays a visit to what looks like the Mos Eisley Cantina, where we see some familiar faces, and Fett finds some info on Luke by employing some pretty harsh methods.
When they get to the house, Luke and Artoo are attacked by a clan of Tusken Raiders or 'Sand People' if you will.

Cut to Han and Leia, aboard a stolen Imperial Shuttle being chased by 2 Tie Fighters and having their lovers tiff type back and forth and they fly into dangerous territory, sound familiar?

Now back to Artoo and Luke at Ben's Place, after Luke chases off the Tuskens he begins to look for clues to learn about being a Jedi and to find answers, but whilst he is searching, someone unexpected turns up!

Had a bit of a love/hate relationship with this one, the art goes from bad to great from panel to panel, especially for Han and Leia. Fett fans will love Boba's inclusion and while there is some great 'Canon' tie-ins, some are too familiar and have been already done in the films