J.J Abrams Talks About Working With John Williams. 'He Was MY DVD or Blu-Ray Of My Childhood.' 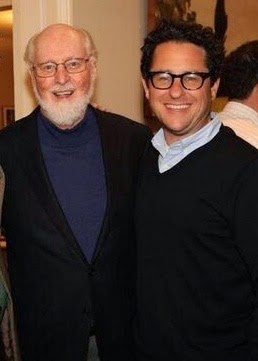 J.J. Abrams recently did an interview with Bruce Handy on the making of The Force Awakens and what it's like being the director of what could be the biggest movie of all time.  During the interview he was ask what it was like working on a movie that he himself has admitted to being a hard-core fan of.  The first thing that comes to mind is meeting John Williams.  He said:

Maybe the weirdest moment, which came months after production, was the first time I sat down with John Williams to show him about a half an hour of the movie. I can’t describe the feeling. All I will say is, just to state the facts of it: I am about to show John Williams 30 minutes of a Star Wars movie that he has not seen that I directed.

I mean, none of what I just said to you was ever going to happen in any form. John Williams—he was the DVD or Blu-ray of my childhood because we didn’t, of course, have VHS tapes of movies to watch when we wanted to. So I would buy John Williams soundtracks, often for movies I had not seen yet, and I would lie on the floor in my room with my headphones on listening to the soundtracks which would essentially tell me the story of the movie that I didn’t know. And I’d look at the photographs on the back of the album and I tried to read what I could about the movie—but really, I would just listen to these soundtracks. So it was an amazing thing to get to know him. But the weirdest thing was the idea that I was showing him scenes from a Star Wars movie he hadn’t seen yet. And the fact that they were scenes that I directed—that’s probably as surreal as it gets in my professional life experience.
Read the interview at Vanity Fair.