Guest Post: Looking Back At Jaws By Ramona Leiter 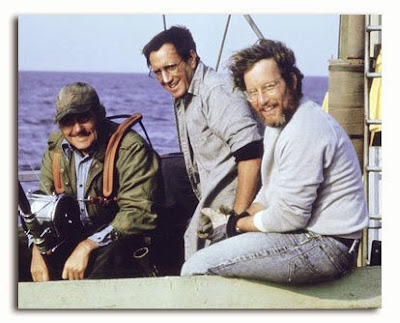 I have always been a sensitive soul.  Overly empathetic you might say.  This is very clear when I watch movies.  Within the first few minutes of a film if there is an intense, emotional moment or something sad…I am instantly a mess.  So I learned a long time ago that horror or violent/bloody thrillers were not normally my “thing”.  When Jaws came out in 1975 I was only four.  At that point the only films I had seen in the theater were Disney ones.  When Bambi’s mom died that was about all I could take for intensity.

However in thinking about this topic and the early memories I have of “Jaws” from my childhood and being aware of it in pop culture, I realized my experiences of swimming in a pool and other kids either pretending to be a shark or humming out the theme song, may very well have been tied into the Jaws 2 sequel that came out in 1978.  Strangely enough, I almost had blocked it out, but I realized I
saw that in the theater with my grandma and her friend.  I surely must have closed my eyes for most of the film!  As for the original Jaws I did not see it until the late 1980s when I was an older teen and it was playing on tv.

Now I had previously had some reasons to get around to seeing Jaws.  For one I was a huge fan of Steven Spielberg and the films of Close Encounters, ET and Raiders of the Lost Ark.  For another, I loved Richard Dreyfuss from his other 70s movies (American Graffiti, Close Encounters and The Goodbye Girl).  And I certainly loved the soundtracks of John Williams.  All three prominent reasons to give a look at Jaws.  However I don’t think I seriously decided to watch the film until another thing happened.  In about 1987 I became a classic movie fan.  I made a concerted effort to watch performances and films that were popular and/or critical hits as well as ones that were nominated or had won Oscars.  Well Jaws was a perfect choice on all counts so this tipped me into finally watching it.

As a budding film buff I believe from the beginning I was impressed with the directing, narrative, editing, special effects and the masterful John Williams score.  (Later on I had my own cassette of his soundtrack and loved the rousing “pirate movie-style” music).  All of these things showed that a blockbuster could also be a well-crafted film.  But as I said I am not much for scary movies, so what made this one good, memorable and ultimately one I would keep re-watching, was the acting from the main three actors, Roy Scheider, Richard Dreyfuss and Robert Shaw.

Roy Scheider (Brody) – Brody is the decent “every-man” type of character that I have always been
fond of.  In an earlier era he would have been played by Jimmy Stewart, Henry Fonda or Gregory Peck.  From the first moment of seeing him on camera I instantly identified with him and felt very comfortable to be sharing the journey of this movie with him as he sought to do whatever it takes to keep people safe – even if it means facing things out of his comfort zone.  Roy brought such decency and sensitivity to this role showing the husband, father, friend, and chief of police that he was.

Richard Dreyfuss (Hooper) – When I first saw Jaws on TV, at that time Richard was the only actor of whom I had previously seen in other movies.  From the time I saw him in Close Encounters I had had sort of a crush on this non-traditional, hyper, energetic, quirky leading man.  He did not disappoint me in Jaws.  He had all of those qualities of humor and humanity very much present in his performance as Hooper in Jaws.  It is he that moves the story forward with greater urgency about the magnitude of the problem the town is facing with the great white shark.  Hooper is like the detective that helps piece it altogether in the first part of the movie.

Robert Shaw (Quint) – In the second half of the movie which is totally different (I liken this to Bridge on the River Kwai – 2 movies in one first half in the prisoner camp and 2nd half the mission to blow the bridge up) that belongs totally to Robert Shaw as Quint.  The other two characters are very much there but it is Quint I can’t take my eyes off.  If I met someone like him in real life I know I would be like Ellen Brody (Lorraine Gary) is in the movie and say that “he scares me”.  However as movie character he is riveting.

Together:  The three actors and their respective characters all could not be more different from one another.  Yet together they make movie magic.  Three fantastically different flavors that provide a perfect combination.  Sometimes movies that intentionally plan to be “blockbusters” throw together a motley crew of different character types but they are often so stereotypical or sketchy or not given enough time to shine on screen that it is hard to duplicate what was achieved in a movie like Jaws.  Also all three actors were not classically handsome but all had extremely interesting and watchable

faces.  My favorite scene is the three of them together sharing drinks, songs, and comparing scars…of course culminating in Robert Shaw’s speech about the USS Indianapolis.  There is an actor…a performance…in just a few minutes he makes you feel like you are sitting right beside him and he is telling you of the most terrifying time of his life….the scary man is instantly humanized and you understand even more his Moby Dick like obsession with going after sharks in general and soon this one in particular.

I am sure audiences were thrilled by all the scares and suspense in Jaws in 1975.  But it was the three actors that made the movie truly work and be so memorable.  When the masses clapped at the end it was for those actors as much as it was for the shark.  For me it reinforced what I would come to expect from the “big movies” even today.  I love to go on a roller coaster ride with a space adventure or superhero flick…but I look for the actors and their characters to relate to.  Without that it just isn’t much of a movie to me.

About the author, Ramona Leiter

In 1976 my favorite film was Bambi.  Then in 1977 came Star Wars and my six year old little mind was blown away (sorry Bambi).   Later that year I saw Close Encounters of the Third Kind and my mind was blown in a different way.  Nothing was ever the same again for me.  Star Wars (A New Hope), Close Encounters, The Empire Strikes Back and Raiders of the Lost Ark shaped my life, my hopes and dreams, and what I collected.  Also from that time the music of John Williams was the soundtrack of my childhood.

I am a divorced mother of two college students and I am starting over again in the beautiful city of Savannah, GA.  I love classic and sci-fi films, and I love walking around historic downtown Savannah and taking pictures of the amazing architecture.  It is my hope to move forward in my life with creativity and adventure...something I learned from those films in those darkened theaters so long ago in a decade far far away. 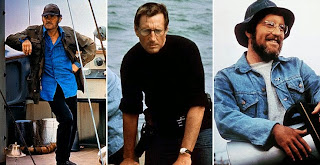