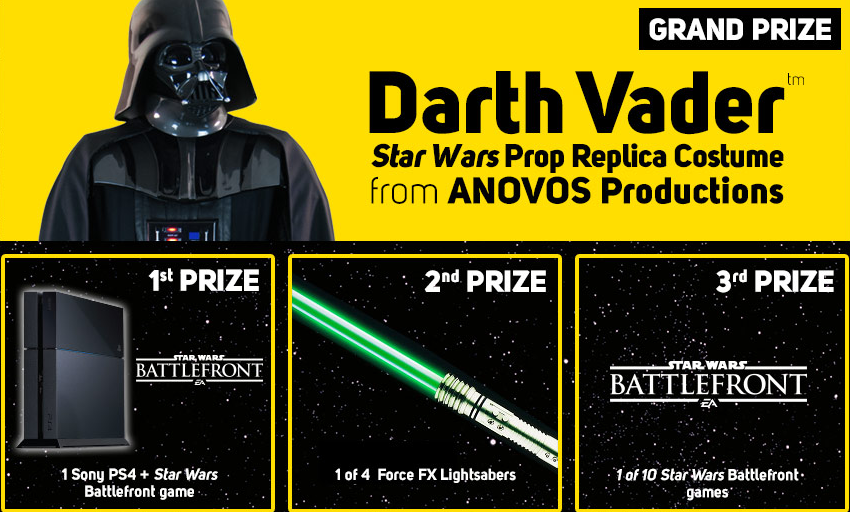 Celebrate Star Wars™ Day with new products and a chance to win your own Darth Vader™ costume!

The Force will be strong in all U.S. GameStop stores and online at www.gamestop.com in celebration of the global fan holiday, Star Wars Day, or May the 4th, as the video game retailer introduces exclusive Star Wars™ products and launches a Star Wars™ May the 4th Sweepstakes.

In stores on May the 4th and in a limited-supply exclusive to GameStop:

All will be in extremely-limited supply.

In addition, it’s a Star Wars™ extravaganza as GameStop has a wide array of collectibles, apparel, accessories and other merchandise featuring the franchise and one of the biggest pop culture events in our history.

Now through May 18, PowerUp Rewards™ members who purchase select Star Wars™ products at a GameStop store will be entered to win prizes such as a free copy of Electronic Arts’ upcoming Star Wars™ Battlefront™ game, Force FX Lightsabers, a PS4 bundle along with Star Wars™ Battlefront™, and the grand prize of being able to suit up like the Sith Lord: an authentic high-end prop replica Darth Vader™ costume from ANOVOS Productions. Customers can also enter and redeem PowerUp Rewards points for additional entries via the PowerUp Rewards catalog atwww.gamestop.com/PowerUpRewards/PUR/Enter/StarWarsSweeps2015.

In Star Wars™ Battlefront™, fans can immerse themselves in the epic Star Wars™ battles they’ve always dreamed of and create new heroic moments of their own.

Pre-order Star Wars™ Battlefront™ at GameStop and on December 1, 2015, and be among the first players to experience the Battle of Jakku, the pivotal moment when the New Republic confronted key Imperial holdouts on a remote desert planet in the Outer Rim.

And in a deal fit for May the 4th, between May 1 and May 4 customers who buy three pre-owned items will get a fourth free, while PowerUp Rewards Pro members get early access to the deal on April 30.