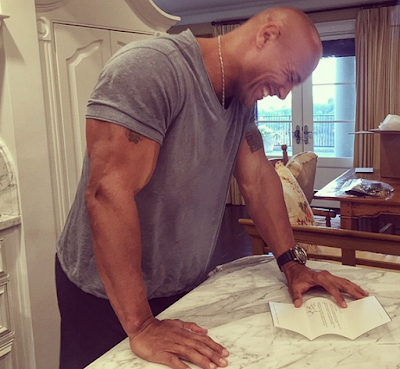 This photo was posted on Dwayne “The Rock” Johnson's Instagram account earlier this week.  It shows him beaming after receiving a letter from none other than STEVEN SPIELBERG himself who Dwayne is a huge fan of.

The photo above was accompanied by this wonderful confession from Dwayne:

Grinnin' now like a big ass kid... When I was 8yrs old I sat front row to see a sold out INDIANA JONES in its opening weekend in Charlotte, North Carolina. I walked out of that theater excited and wanted to be "Indy".. cool, funny, charming with the ladies and kickin' ass w/ a smile. But at 8yrs old I was also perfectly content playing w/ my Star Wars figures and sneaking off listening to Richard Pryor concerts. Throughout the years I've credited this man and his movies as being my greatest inspiration in becoming an actor and wanting to always make "his kind" of movies - entertaining, quality and above all else.. heart. Just receiving this personal letter from him and its not only made me incredibly humbled and grateful, but it's also brought me back to being that 8yr old boy again who not only loves movies, but I now get to make the movies I love and enjoy the impact they have on others. THANK YOU STEVEN SPIELBERG for these inspiring and motivating words in your letter and cheers to making sure I'm always listening to that little voice in my gut. #CoolestGiftEver #BigAss8yrOldKid #SpielbergInspired


When asked about the letter San Andreas producer Beau Flynn hinted that the letter from Steven described how he is a fan of The Rock himself which humbled Johnson even more.

Just waiting for my letter any day now.