Does "Burying The Ex" Bring Back The Glory Days For Joe Dante? 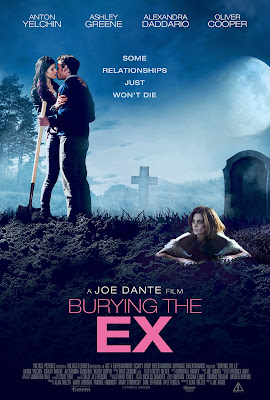 It has been six years since the last Joe Dante Film.  THE HOLE was a smaller production from a movie-maker who, in the eighties was planted securely in the A-List of film makers, directing classics like PIRANHA (1978), THE HOWLING (1981) and of course GREMLINS (1984).

Since the mid ninety's Dante's work has been but not box office gold like his movies for Amblin Entertainment.  His last big movie, being a non-smash, was 1998's SMALL SOLDIERS, an Amblin/DreamWorks production.

My personal connection to Dante (like so many other movie fans of the eighties) is of course 1984's GREMLINS.  He doesn't have to prove anything for me personally, being a director of to three of my favourites, GREMLINS, EXPLORERS (1985) and INNERSPACE (1987.)  These classics I watched on almost a daily basis on VHS in the late eighties, I will admit that on top of being enjoyable movies, my Meg Ryan crush was a vital part of the re-runs.

These three movies easily get ten out of ten from me and other notable mentions from Dante are GREMLINS 2 - THE NEW BATCH (1990), THE 'BURBS (1989), SMALL SOLDIERS and his gem MATINEE (1993) 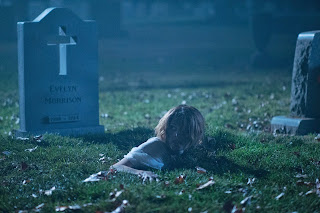 Back to 2015 and his newest feature, BURYING THE EX.  The concept of this horror comedy, which doesn't exactly seem to know if it's a comedy or something more serious, is very "marketable," a "high concept" as they say.  A couple in a troubled relationship, she dies right before he tries to dump her, he meets another "cuter" girl, the ex comes back...Those are no spoilers, those are all good scenes from the trailer.  Sadly, there isn't much else and the blame doesn't go to the director, or the actors who give their best - its solely a screenplay problem.  There's isn't enough meat here (let me go back to the "meat" part later.)

The screenwriter, Alan Trezza, based the script on his own short film. I won't go there, I won't say typical stuff like "what did you expect?  He stretched it to a feature film."  No, there is always a way to make more of something less.  Unfortunately it just doesn't  work that well here.

There's more to get from the trailer, than from the finished film.  Don't get me wrong, it's not a bad film. It's just as a Dante fan I was expecting a lot more.  As mentioned at the beginning I've been waiting six years for something better than THE HOLE (not a bad movie either but still not a return to his classics.) 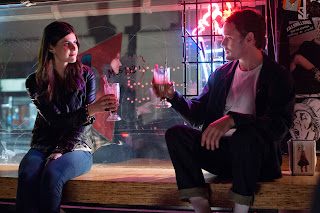 The music score:
Before I go to the actors I have to comment on the most vital part of the "old" Dante movies and sorely missing since July 2004.  The "soul" of the movies from THE TWILIGHT ZONE - THE MOVIE (1983) segment until LOONEY TUNES - BACK IN ACTION (2003) was film composer and maestro Jerry Goldsmith.  No easy task at all, to be his successor in composing the music for new Joe Dante films.  The score for THE HOLE was weak, but I credited this on Javier Navarette's style, knowing him from  Guillermo DelToro movies.  That's why I hoped that the composer of this movie, Joseph LoDuca would bring something spooky, something quirky, as in his greatest efforts like EVIL DEAD 2 or CURSE OF CHUCKY. But no. It's better than the last score, but sadly not memorable enough.

Anton Yelchin is a very fine actor and with the right material a very good one. He's very charming in this film, although very reactive. We believe in his start-up plans and wish him to be successful, but the problem is - again with the script - his relationship with his girl, before the accident.  There isn't any chemistry between them.  The only thing we get to know is that their sex life is great. They haven't anything else in common, but they live together.  There's stuff between them happening, questions that arise (merrily for exposition terms) where everyone who's in a relationship asks himself: "did they never talk about that stuff before the first act started?"

So, it's no wonder that he and we, for that matter fall head over heels for the new girl that appears in his life - played by the wonderful Alexandra Daddario.  I've been a fan of her since the two PERCY JACKSON movies, but here's she shines like nothing else.  She cute, quirky and just lovable.  Side note: just watched her in SAN ANDREAS. Easily the best in that movie too.

The Ex, played by Asley Greene, is stiff, even before she becomes undead. Her character is soooo cardboard, it hurts.  And that's my biggest beef (pun that follows intended) with the screenplay.  The Ex is an environmental-vegan-something activist of the 90's kind.  Why do you make the "villain" of your story in 2014 vegan? Alright I'm vegan and I care for our planet, but as a screenwriter, I'm pissed that they didn't even use that in the following acts.  Why do you specifically mention that she's vegan when you don't use this great set up for her time as a zombie. If you use cliches, go big!

My favourite character is also a cliche, but the guy is so much fun.  Oliver Cooper plays the half-brother to the main character and is the one needed humour through-line of the movie.  I liked him very much in the last season of CALIFORNICATION and he's a welcome addition here.

And let's not forget the mandatory guest spot of Dick Miller and  two other guest roles played both by actors from INNERSPACE, Archie Hahn and John Hora.

BURYING THE EX reminded of an AMAZING STORIES Episode called "Go to the head of the class" (1985) which was directed by Robert Zemeckis and starred Christopher Lloyd.  The script of that episode was much stronger and of course the production values too.  Also Yelchins character is very reminiscent of his characters in FRIGHT NIGHT and in Stephen Sommers ODD THOMAS (give this one a try, a good b-movie).

Final thoughts:
Please movie gods, give Joe Dante a big A-Movie, even if it is a reboot or remake of one of his own movies!  Let's not forget the most current example, George Millers MAD MAX FURY ROAD.  Bring Dante with the same vengeance back to the big screens! (Geek stuff: Miller and Dante worked on THE TWILIGHT ZONE - THE MOVIE, on different segments!)

But still, if BURYING THE EX gets him to do his dream project THE MAN WITH KALEIDOSCOPE EYES (about Roger Corman and the sixties) I will embrace his latest movie wholeheartedly.