Crossing the Frontier - The Making of The Last Starfighter 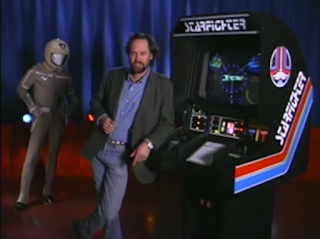 Following on from our post yesterday on a possible sequel or reboot of The Last Starfighter being talked about here's a 'making of' featurette on the 1984 classic.  Hosted by Lance Guest.

The Last Starfighter, in addition to Disney's Tron, has the distinction of being one of cinema's earliest films to use extensive computer-generated imagery (CGI) to depict its many starships, environments and battle scenes.

The Last Starfighter was Preston's final film role. His character, a "lovable con-man", was a nod to his most famous role as Harold Hill in The Music Man. There was a subsequent novelization of the film by Alan Dean Foster, as well as a video game based on the production. In 2004, it was also adapted as an off-Broadway musical.