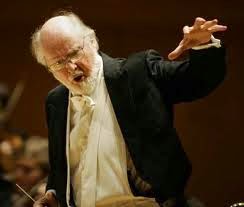 How would John Williams sound with the use of only 1 kind of instrument ?
Here's a tribute to John for twelve French Horns.
It sounds amazing (as far as I'm concerned).


And since I just can't get enough of the Suo Gan Lullaby from Empire of the Sun, as featured above, I include the original sequence from the film as well.