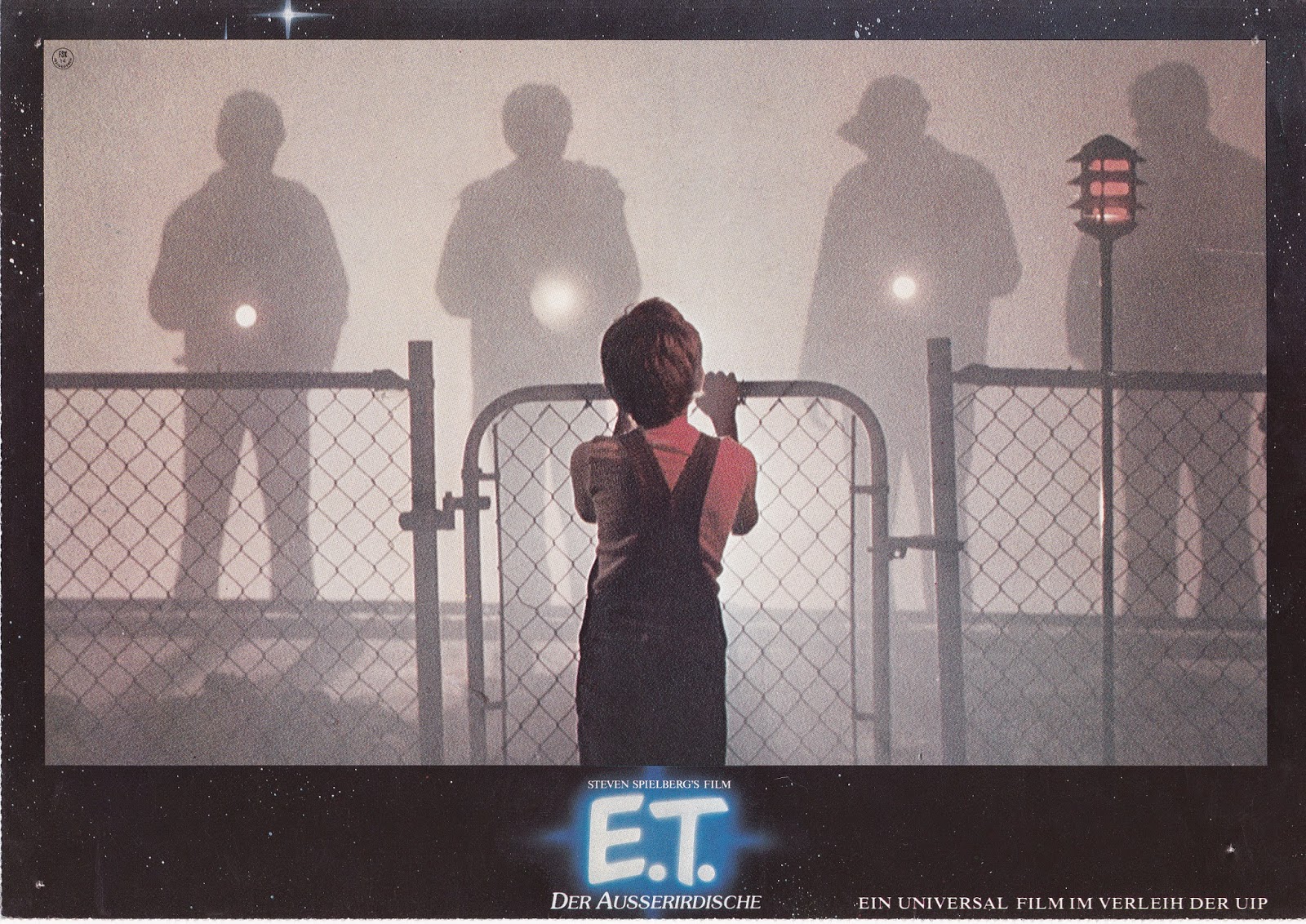 Even though the whole world knew how E.T. looked, when the film hit the theaters in 1982, It is very difficult to find a film still from that year, with E.T. himself on it. 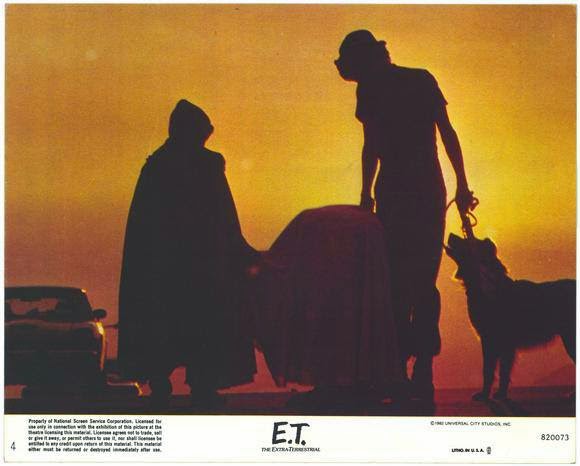 It almost reminds us of 1975, the year Spielberg hit it big with Jaws, the film that didn't show it's most important star until halfway the film...

The fun part with E.T. however is that the press had almost nothing but stills of E.T., whereas the movie houses couldn't show their patrons pictures of that little alien. 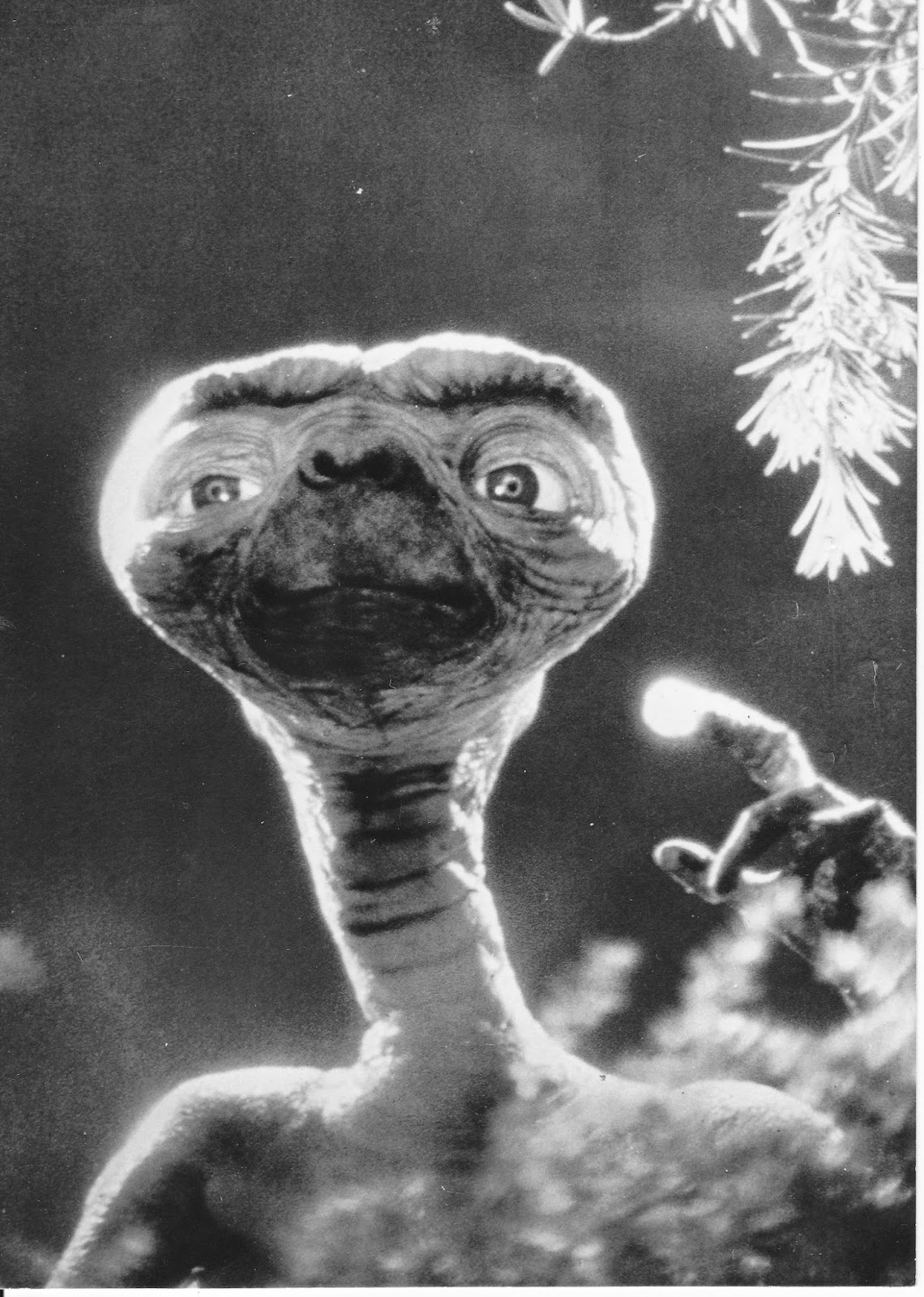 In Germany however it was decided (?) that the star of the film should get his (or her ?) fair amount of  publicity outside the cinemas as well, as can be seen in this German Press-Kit from 1982: 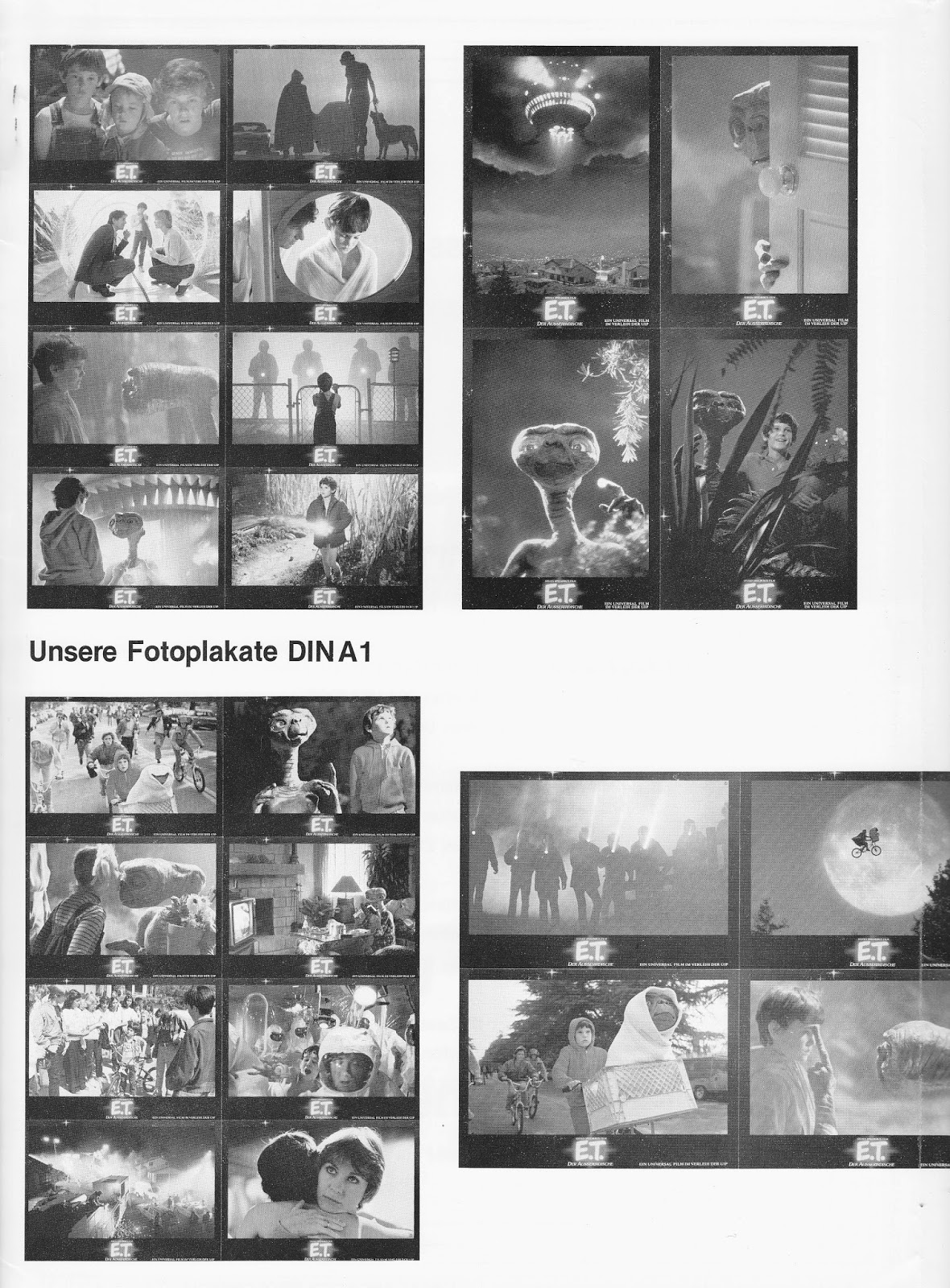 In those days film-stills were produces in the shape and size of film posters,
but the stills could easily be torn apart.
Funny enough that E.T. not only features prominently on these stills, they also used a promotional still of E.T. together with Elliot posing behind some plants as if it were an actual film scene. 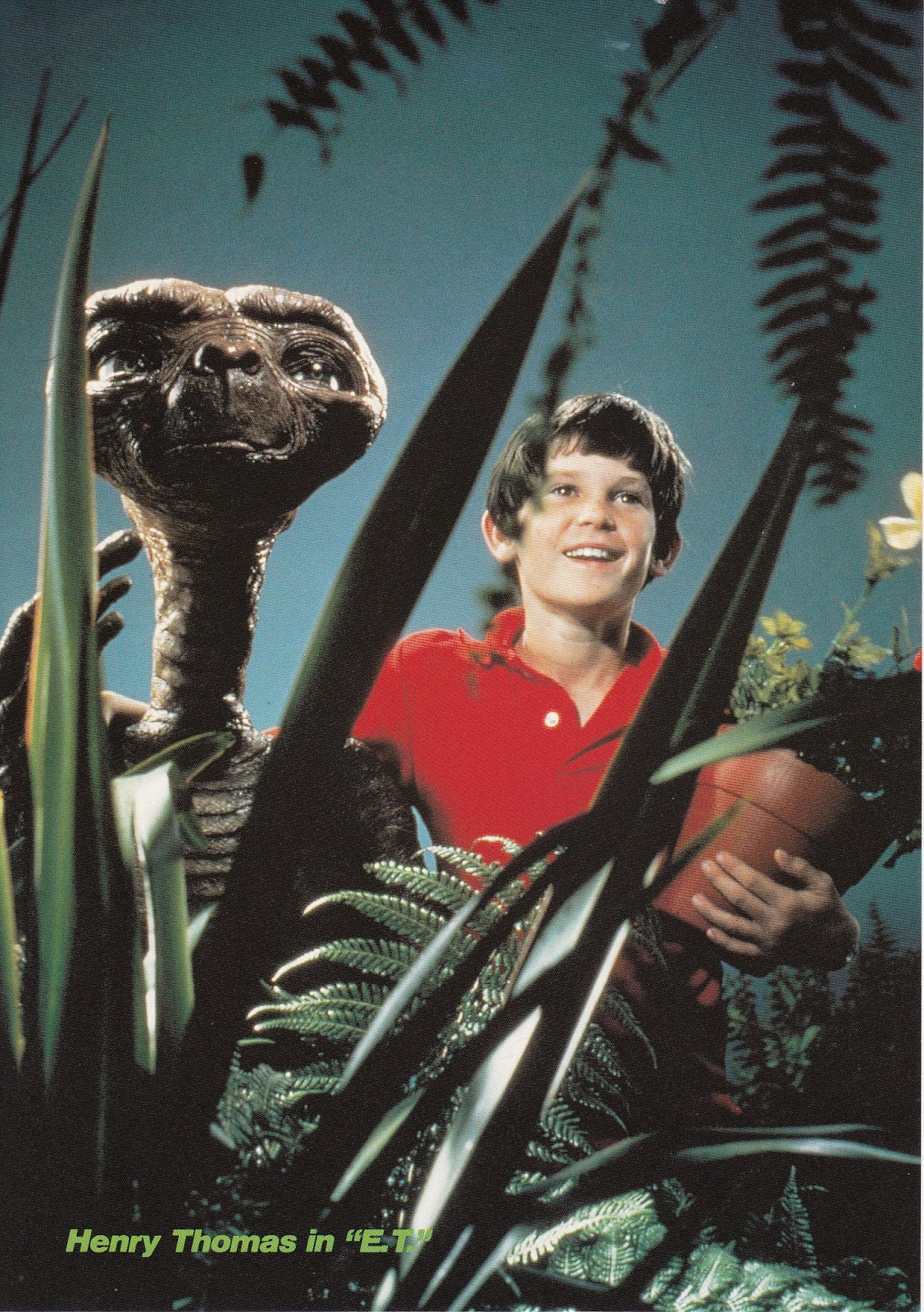 Even though the stills may have been rather colorful, the adds on the other hand were (in my opinion) rather dull. Instead of using the film poster as a background for the adds, only a part of that was used, just the hands of Elliot and E.T. touching each other. 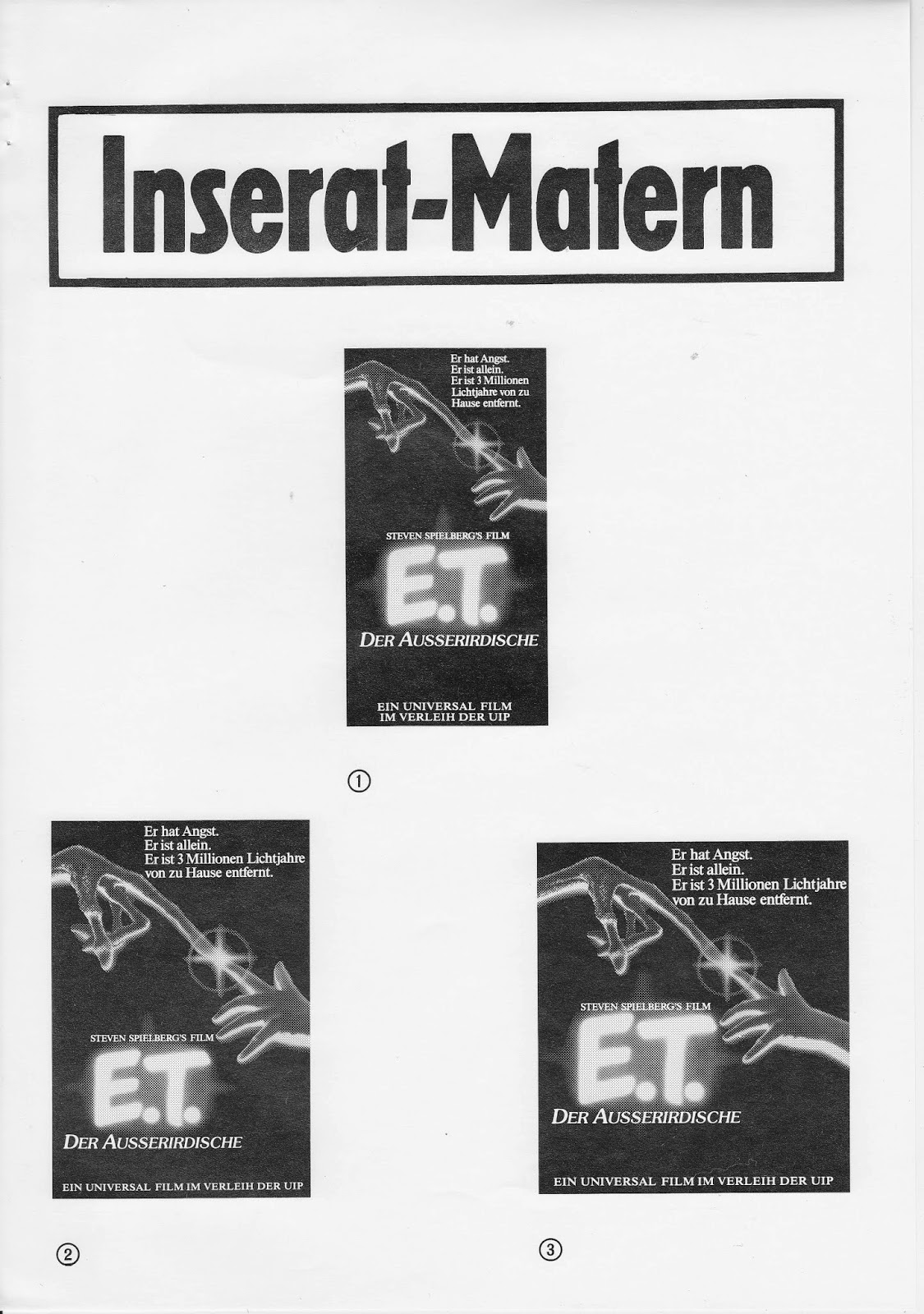 Whereas in most other countries, the addition of the earth and the various stars in the background added some depth to the advertisement (again, in my opinion) 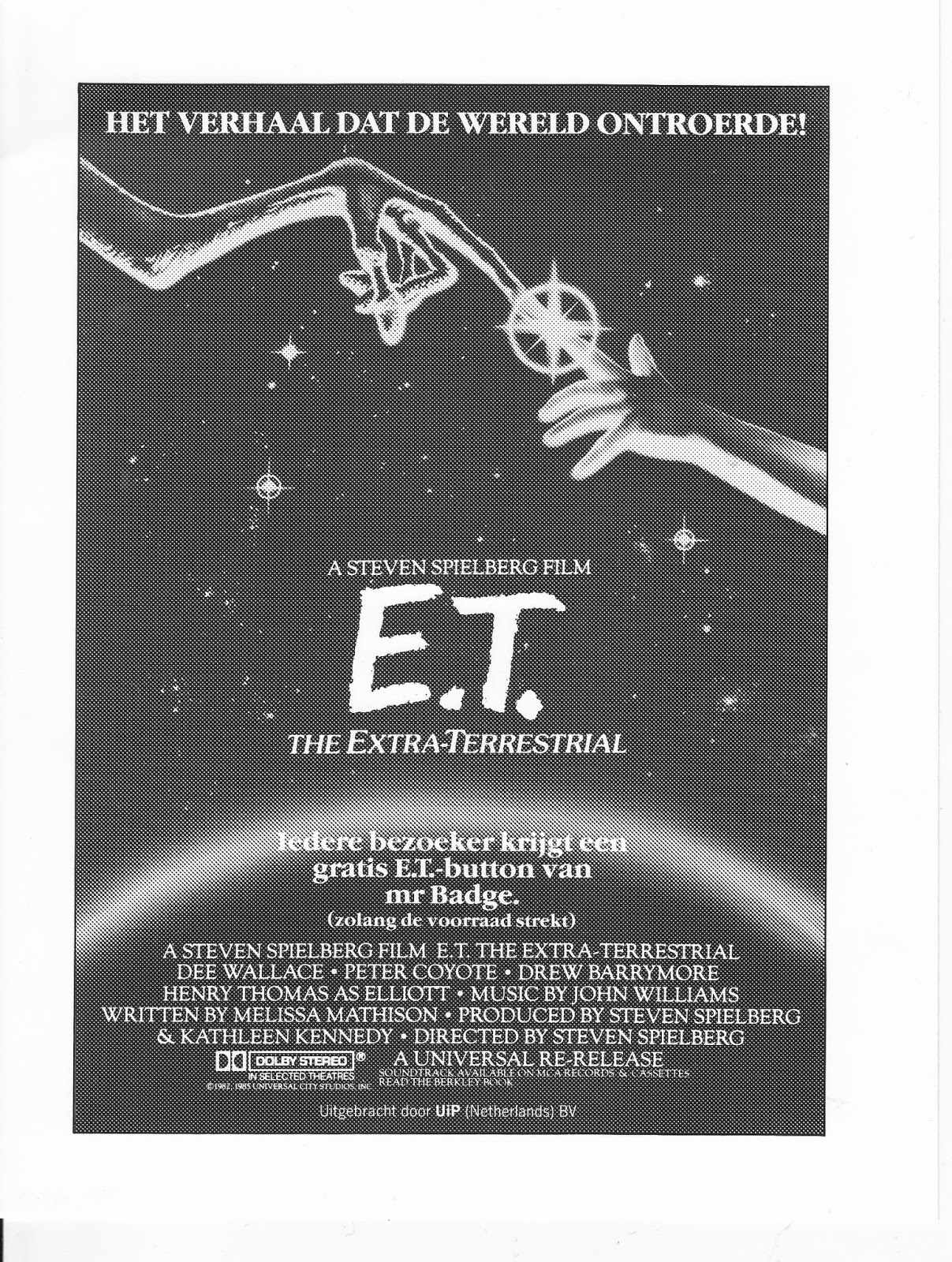 When the film got it's digital clean-up and re-release coinciding with its 20th anniversary in 2002, the add-design was 'slightly' changed. 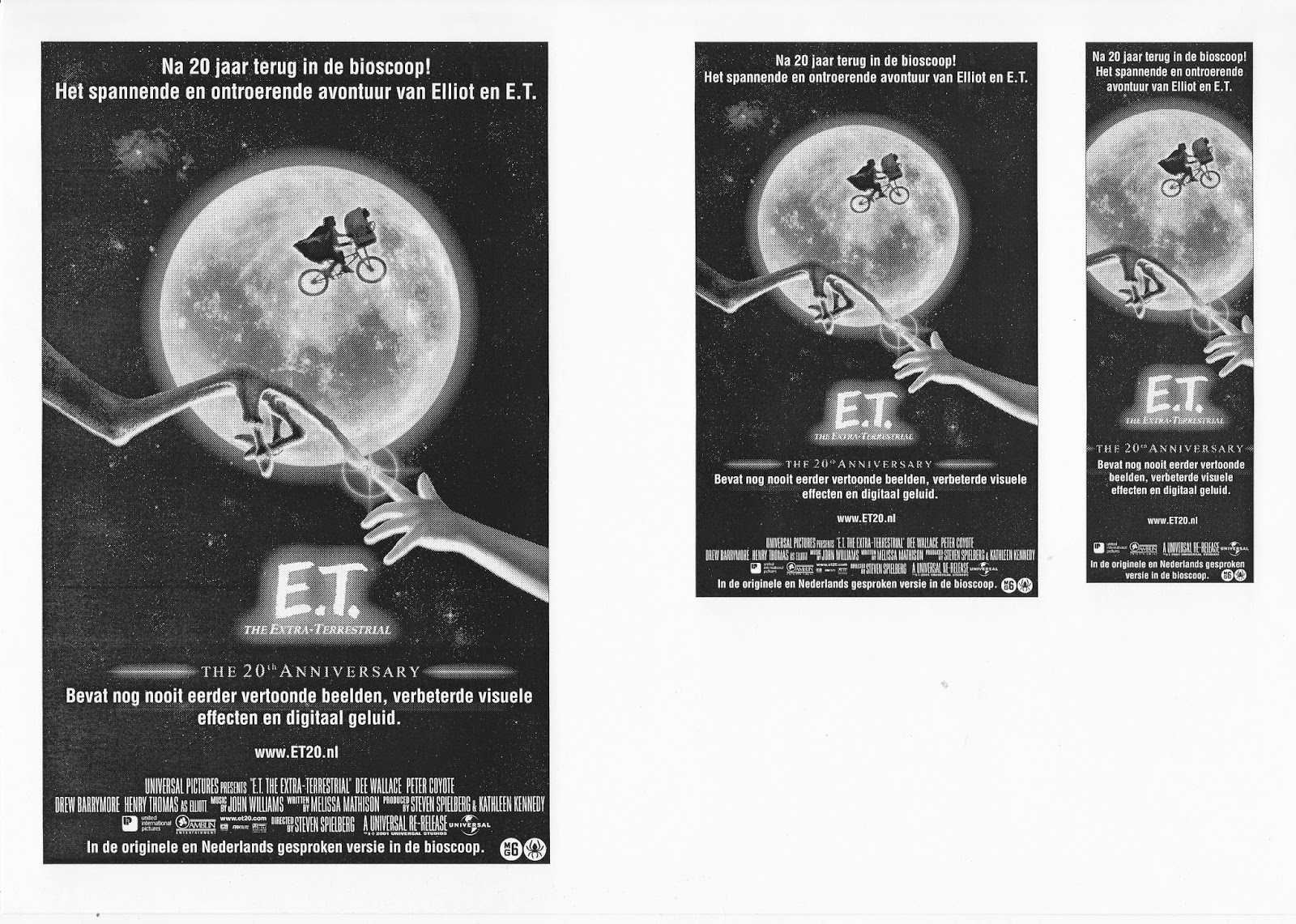 Funny thing here is that when E.T. was re-released in 2002, E.T. than did appear om some of the front-of-house-stills in cinemas, but now it was the press-stills, that hardly showed E.T. . 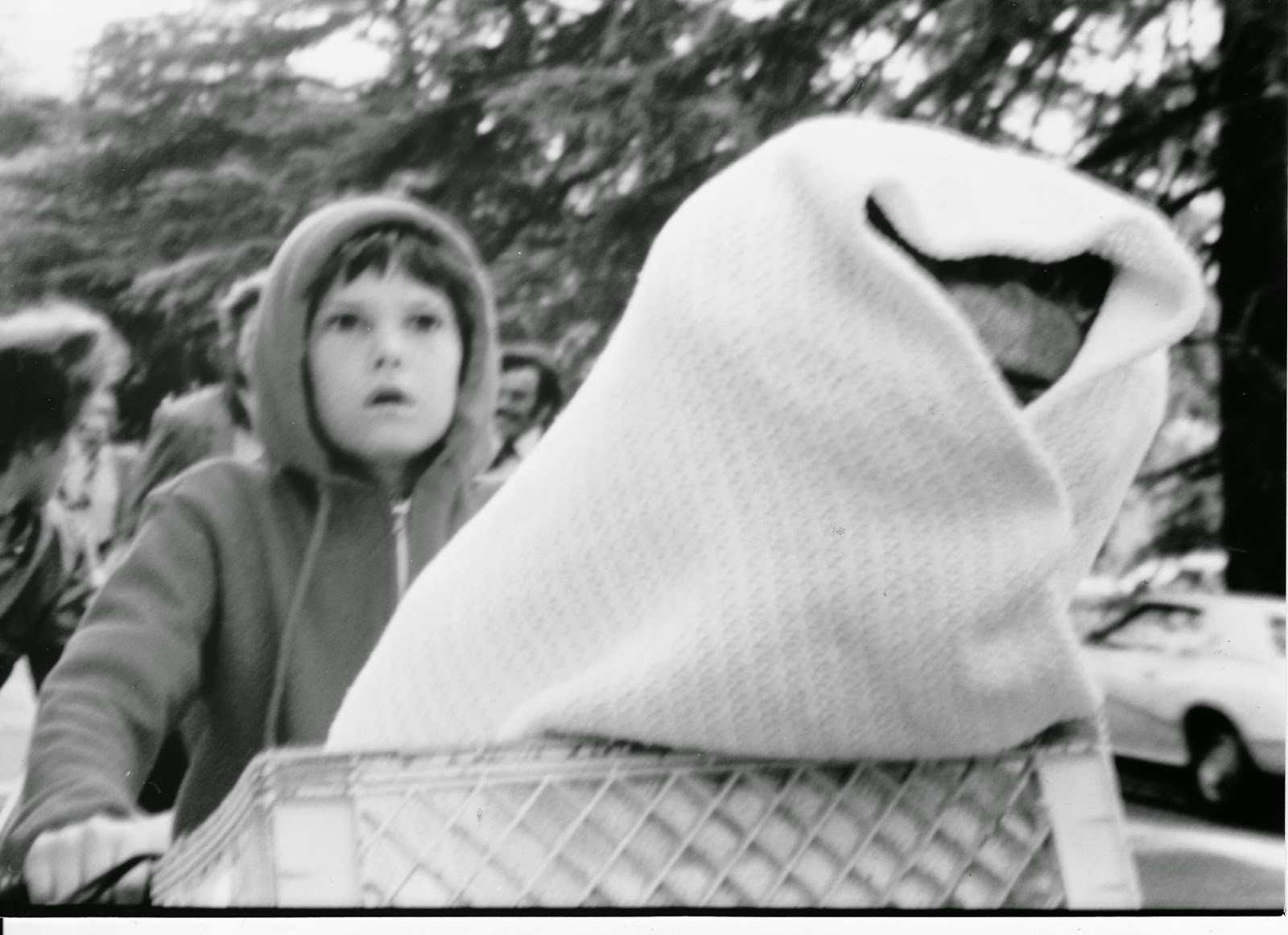 But hey, I started of by claiming that E.T, wasn't on many film-stills,
besides on those from Germany, so let's show you a couple of them in full color,
instead of those tiny black-and-white prints you saw earlier. 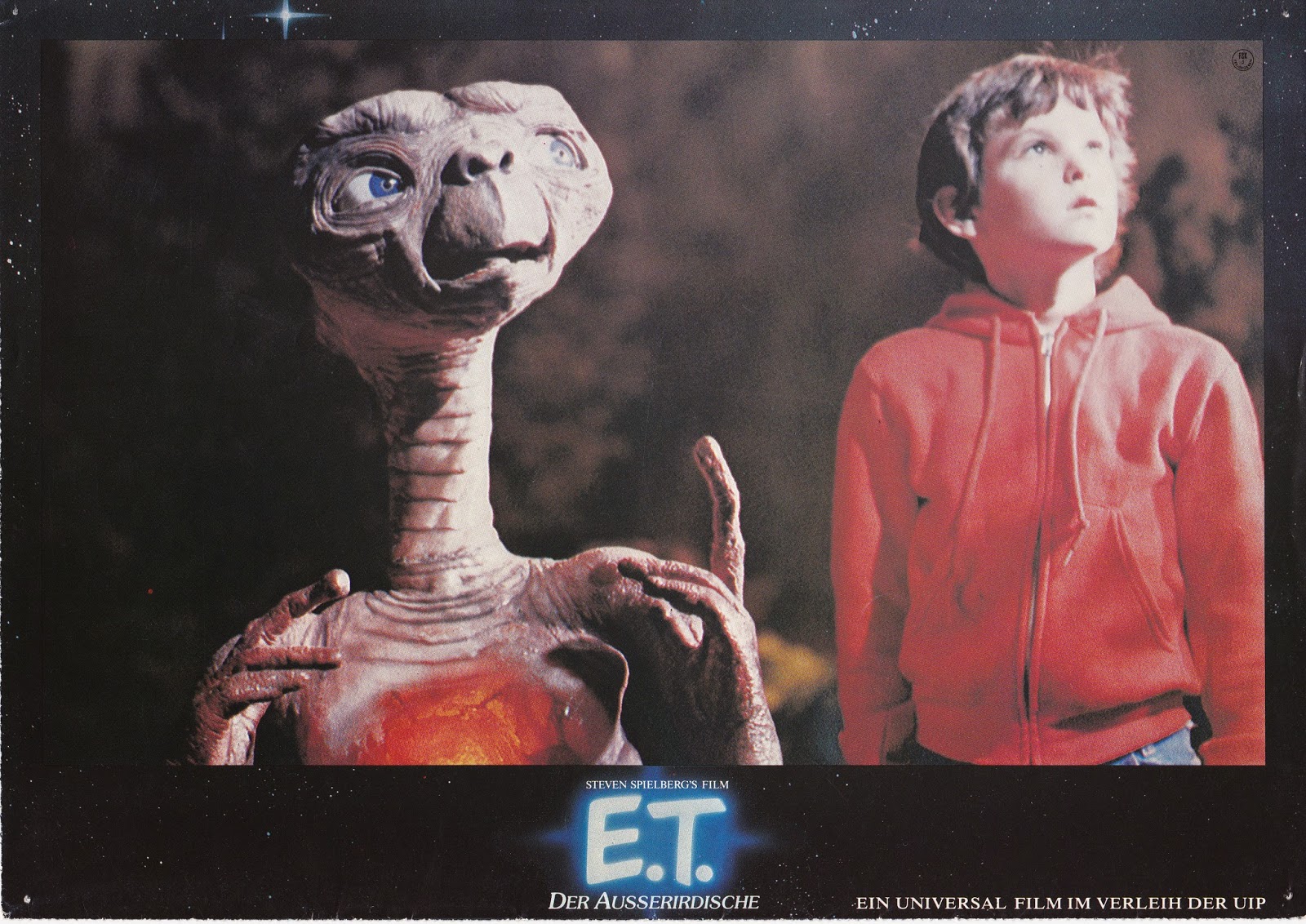 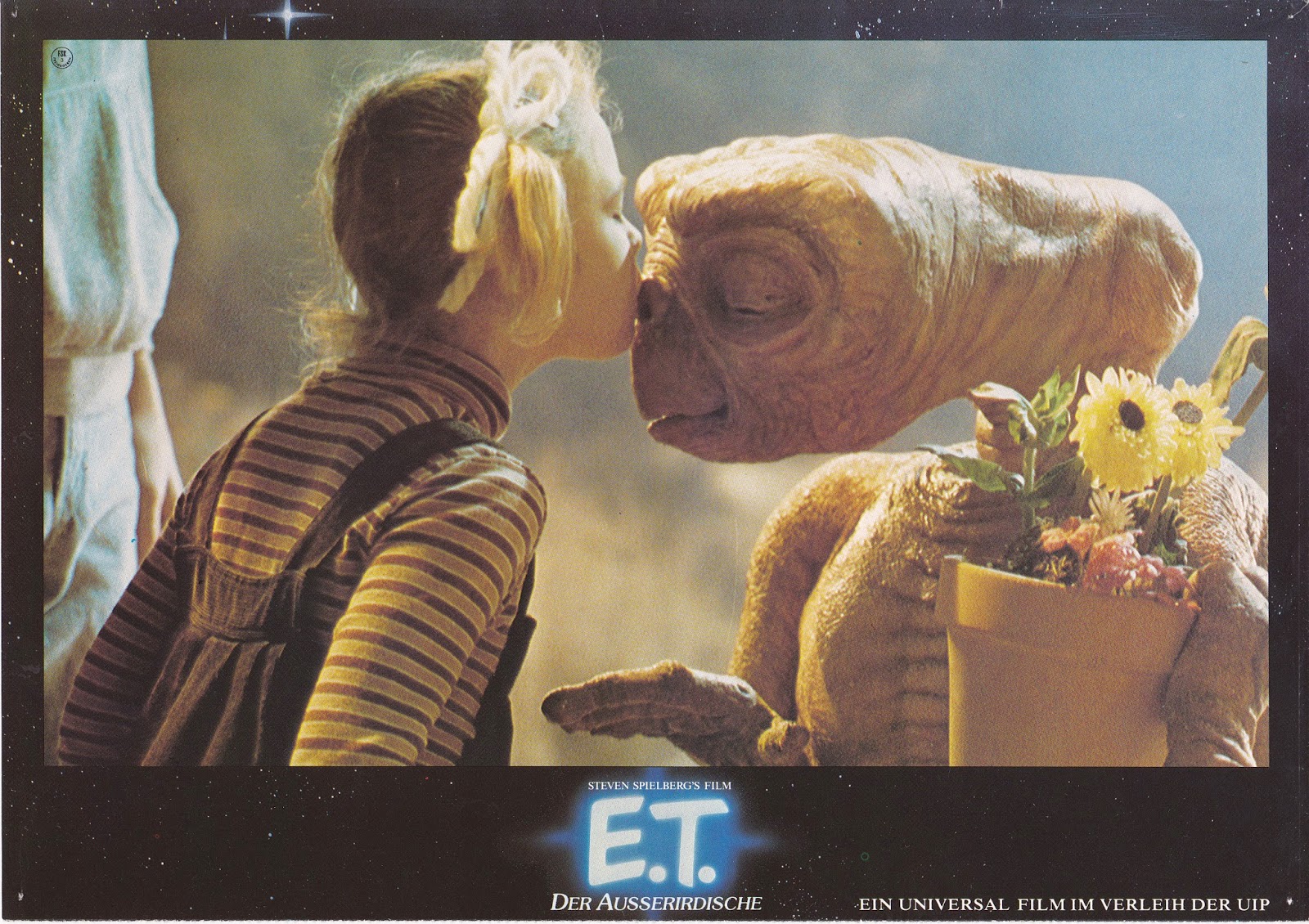 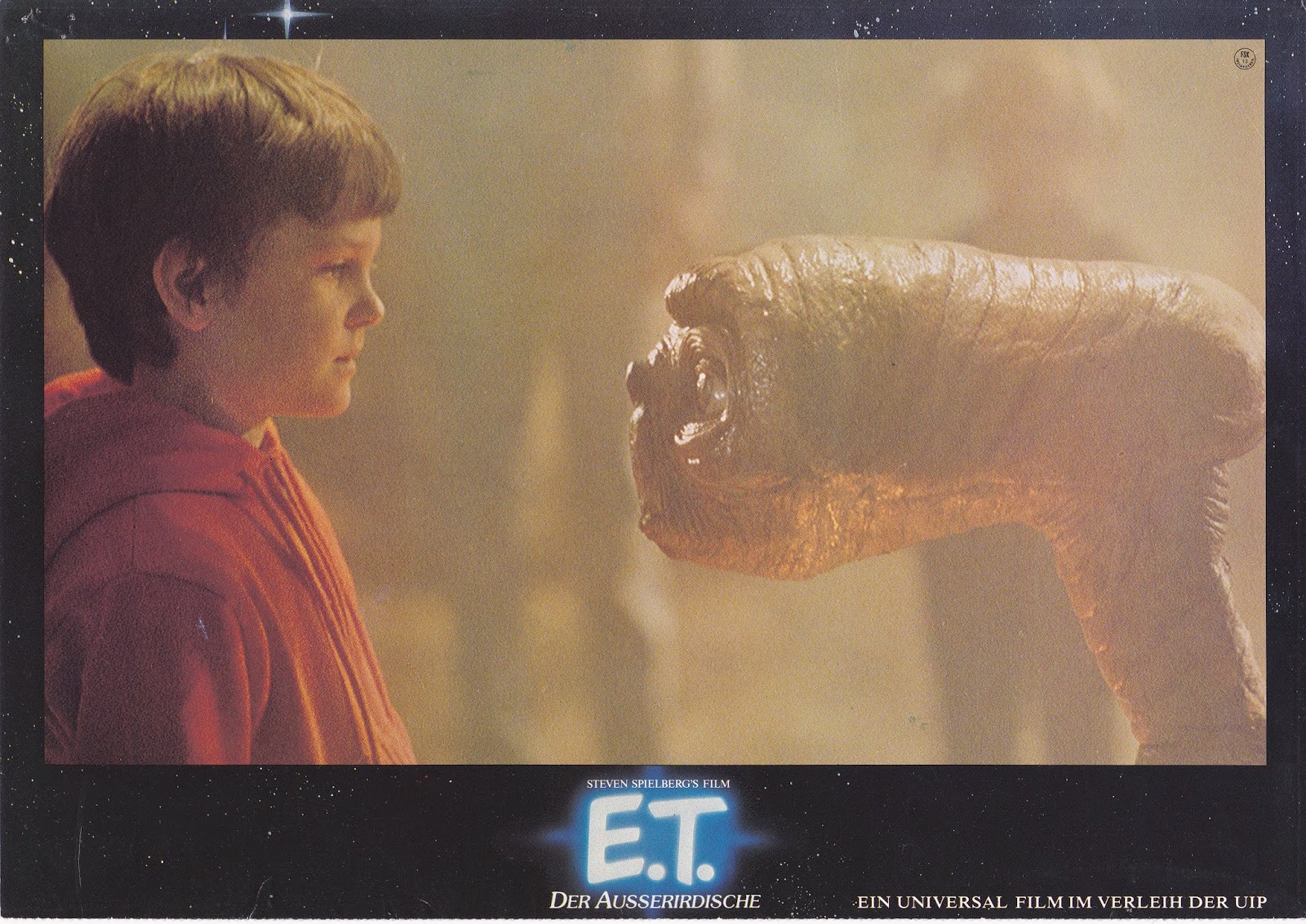 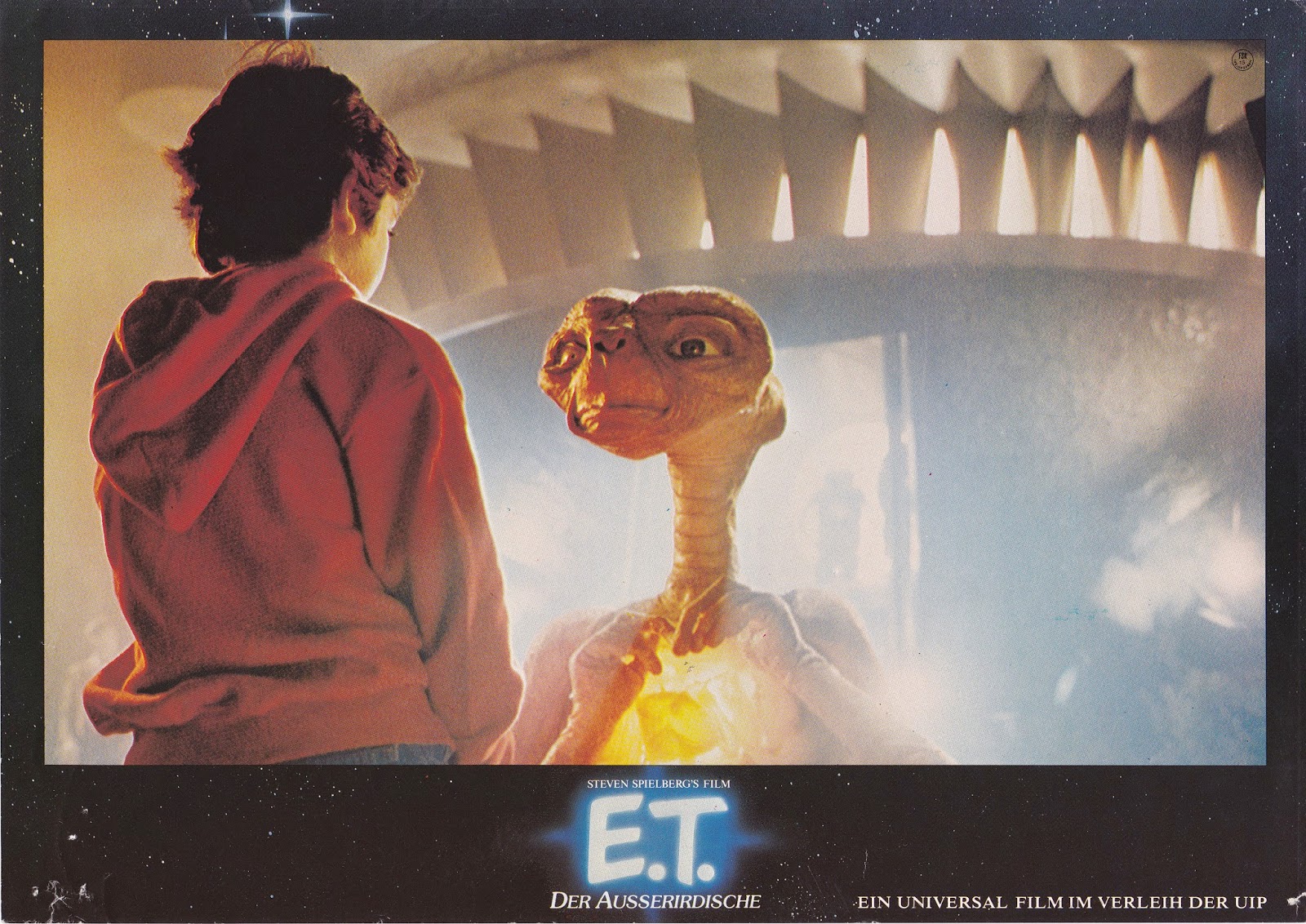