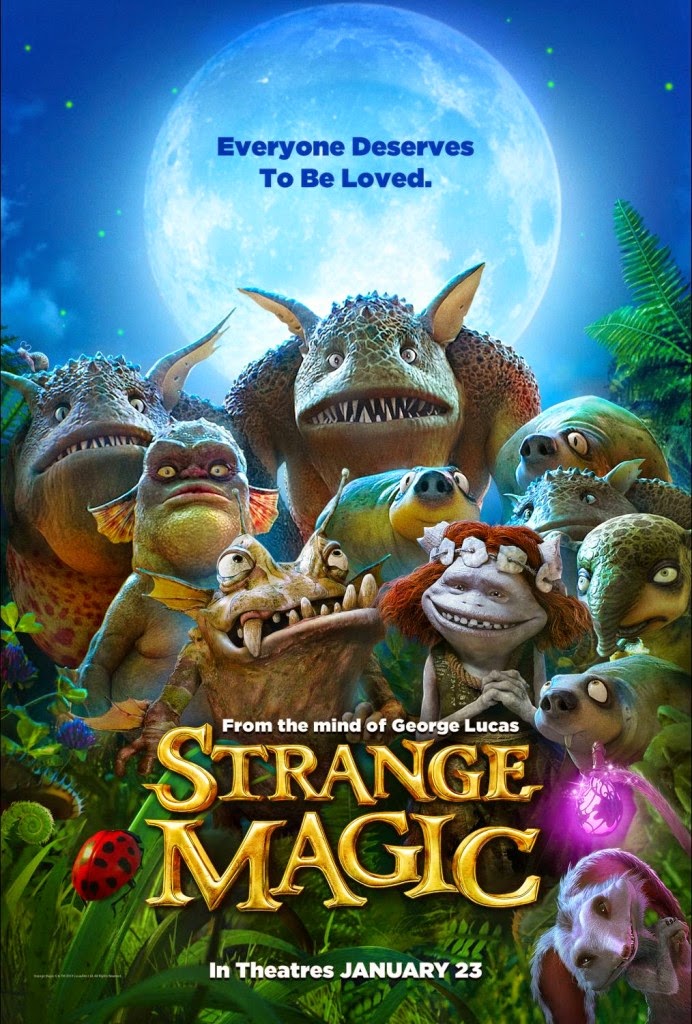 Strange Magic is the first film from George Lucas since selling Star Wars to Disney back in 2012. It’s an animated fairy tale loosely based on Shakespeare’s A MidSummer Night's Dream. A large part of the story (by Lucas) is told through the use of popular music, with characters frequently bursting into song to convey their emotions and advance the story.

The plot revolves around a love potion, greatly desired by the varied denizens of both the Light Forest and the Dark. Fairies, elves, goblins, and imps all vie for possession of the potion in order to satisfy their respective goals - Some for good, some for ill, and some for pure mischief.

I saw Strange Magic with a small group of friends, and I asked them to write down their opinions - Both positive and negative. One thing we all agreed upon - The animation was stunning! Industrial Light & Magic’s considerable talents were on full display. As one of my companions noted, the animation looked so real that she felt as though she could step right into that world. From flower petals, to fairy wings, to freckles on a character’s nose - It was believable and not “cartoonish” in any way. It definitely benefits from being seen on a big screen.

While all of us appreciated the use of music as a storytelling device (à la Shrek), a few of us thought it was overdone. I felt that some musical selections became repetitive, and one of my friends thought that the songs got in the way of any real character development. As a result, the story felt rushed. Still, the musical selections were appropriate and fit within the context of the movie, and the performances were solid.

George Lucas obviously created this story with children in mind, and those present in the theater (and there were a fair few) responded positively. Their laughter could be heard at various points in the movie, and in all the right places. I even heard adults around me chuckle from time to time - My group included. We agreed that the humor could be a bit cornball, but it was innocent and fun. Perfectly suited for family viewing.

Strange Magic, at its heart, is a love story. After all, as the tag line says, “Everyone deserves to be loved.” The way the love story played out was predictable, I’ll admit - There are only so many characters, so process of elimination wasn’t tough - But it was sweet and satisfying when all was said and done. The moral of the story is a wonderful one to pass on to kids of all ages: Love can be found in the most unlikely of places, when you least expect it, and it has the power to unite the most disparate of worlds. Who can find fault with that?

Click here to see when Strange Magic opens in your country.

Thank you to Melinda, Bethany, and Erika for being my movie-going and opinion-giving companions.