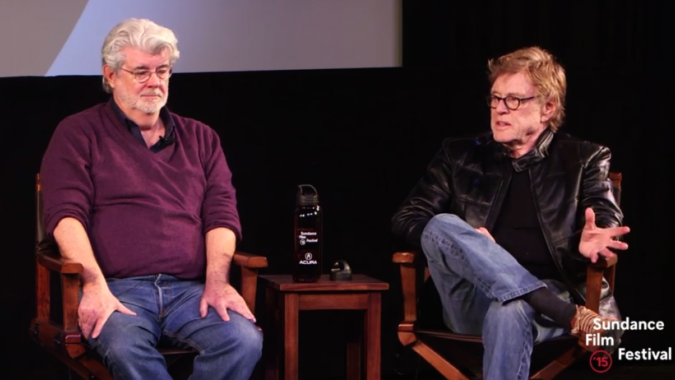 George Lucas and Robert Redford were at the "Power of Story: Visions of Independence" panel at the Sundance Film Festival with critic Leonard Maltin on Thursday afternoon.  The conversation ranged from their love for movies to their contributions to the movie industry.  At one point George Lucas talked about his movie empire that was created including ILM and Skywalker Sound.  Lucas said "In the process of  making Star Wars, there were no visual effects houses, so I had to make one...Everything I've ever done has been to make the process easier and to open up the imagination.  Every job in ILM has been created for a particular shot or a particular movie."

Independent movies were mentioned with passion during the conversation with both guests showing their love for this aspect of film making.  George Lucas expressed his feelings by saying independent film making is more exciting than the current mainstream industry, and criticised the main stream movie industry and likened to a "circus" that is more concerned with spectacle than story.

Lucas hit back at criticism that Star Wars was the catalyst for the huge blockbuster culture and lack of substance.  He said, “If you go into ‘Star Wars’ and see what’s going on there, there’s a lot more substance than circus.”

He did hint, however at the early decision to have the rights to the distribution of toys and merchandise and said "all the money is in the action figures.”

“I would never guess people would watch cats do stupid things all day long,” said Lucas.

Robert Redford praised George Lucas during the talk saying, "What I admire about what [Lucas has] done is, he's been able to control his whole universe,...Not only is he going to make the film, he's going to come up with a way to handle the whole thing so he's not dependent on anybody."

Find out more about the Sundance Film Festival and George Lucas in attendance here.