Thimbleweed Park Is Like An Old Lucasarts Game You've Just Found In A Drawer. Spiritual Successor To Maniac Mansion @grumpygamer 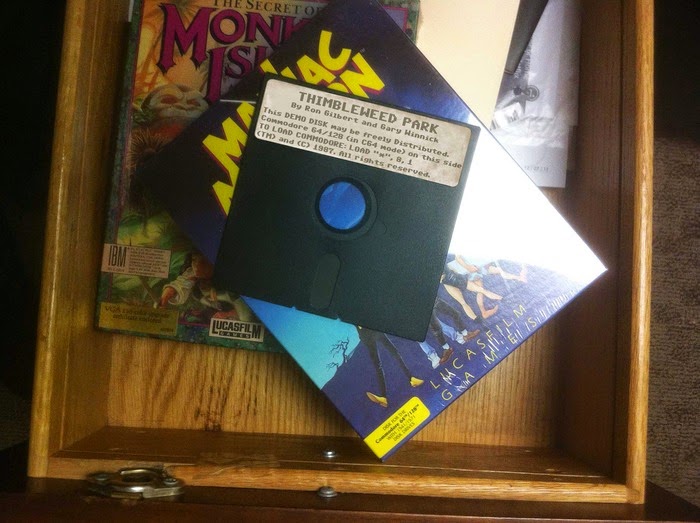 'It’s like opening a dusty old desk drawer and finding an undiscovered LucasArts adventure game you’ve never played before.'  Thimbleweed Park is a new game that cuts to the core of what made classic point & click adventure games so special, and done by the actual people who spawned the genre.

Maniac Mansion's Ron Gilbert and Gary Winnick have started a new Kickstarter campaign with the aim of bringing to the world a brand new classic point n' click adventure game.

The team are trying to raise $375,000 and are quite a way through their objective.  It's no wonder when you read what they promise to bring to us.  As they put it 'a spiritual successor to Monkey Island and Maniac Mansion.'  Enough said.  Where do I pay?

Take a look at the blurb below from their Kickstarter page and the link to the main page.  We will be displaying the widget at the top of the page to keep track of their goal and hopefully encourage a few pledges.


Ever wonder what it would be like to play a classic adventure game the day it came out and experience all the surprise and charm for the very first time? Wonder no more!
Twenty-five years ago, Ron Gilbert and Gary Winnick created the game that introduced the world to 2D point & click adventure games. Maniac Mansion took the computer game world by storm with its compelling story, complex puzzles, cutting edge humor, engaging game play, and provided an entire generation with a new idea of what an adventure game could be. Blah blah blah...
And now they are back together with an all new 2D point & click adventure game!  Ron is skinny again and Gary had that rash looked at — and they're here (finally!) to create the true spiritual successor to Maniac Mansion and Monkey Island.
Thimbleweed Park is a new game that cuts to the core of what made classic point & click adventure games so special, and done by the actual people who spawned the genre.
It's deep, it's challenging, it's funny, it's everything you loved about adventure games.
Holy crap is this going to be fun! And you can be part of it - right here and right now for $20 bucks which is like $1.52 in 1987 dollars.

Why do we want to make Thimbleweed Park? Because we miss classic adventures and all their innocence and charm.
They were fun and would put a smile on your face. We want to make one of those again and we want to do it right. We don’t want to make a game “inspired by,” or “paying homage to” classic point & click adventures, we want to make a real classic point & click adventure.
Thimbleweed Park is a game for true lovers of adventure games. This is a Kickstarter for fans who loved Maniac Mansion, Monkey Island, and everything else that made that era great.  It strips away all the cruft built up over the years and is distilled down to what we loved about the genre.

Thimbleweed Park is the curious story of two washed up detectives called in to investigate a dead body found in the river just outside of town. It’s a game where you switch between five playable characters while uncovering the dark, satirical and bizarre world of Thimbleweed Park.
Lost along a dusty stretch of highway, the town of Thimbleweed Park once boasted an opulent hotel, a vibrant business district and the state’s largest pillow factory, but now teeters on the edge of oblivion and continues to exist for no real reason. It’s a town that makes you itch and your skin crawl. It’s a place no one ever looks for, but everyone seems to find.

Not far from town, Delores and her siblings are gathered at the reading of her rich uncle’s will where the backstabbing, intrigue and puzzle solving knows no end. How is this all connected to the dead body under the bridge? Good question.
At the long abandoned circus grounds, Ransome the Clown had been cursed and can never remove his make-up. How did he get into this situation? How can he get out? Does he really want to? What’s up with that dead body slowly bloating in the water? Who knows!
Meanwhile, on the 13th floor of the Edmund hotel, Franklin wakes up with no idea how he got there. But that’s not the weird part. The weird part is that he’s dead. Spoiler: He’s not the body found just outside of Thimbleweed Park. Wow! That's confusing. Don’t panic, we’re just as confused as you are.

We like big pixels. Huge ones. Pixels that have their own Zip Codes. Pixels a family of six could live inside of and still have room for Uncle Pete when he drops in unexpectedly on his way to the coast.
We had a lot of fun building Maniac Mansion, there was a charm and simplicity to the art that let the game design shine and your imagination run wild.
We want Thimbleweed Park to be like an undiscovered classic LucasArts' adventure game you'd never played before. A game discovered in a dusty old desk that puts a smile on your face and sends a wave of nostalgia through you in the same way it does for us.

RON GILBERT is a game designer, writer and programmer best known for creating and designing the cult classic adventure games Maniac Mansion and Monkey Island. Ron was the ninth employee at Lucasfilm Games, instrumental in their leap into adventure games, and creator of the SCUMM engine. He was the co-founder of Humongous Entertainment and made numerous adventure games for kids, such as Putt-Putt, Freddi Fish and Pajama Sam. His most recent work includes the adventure/RPG DeathSpank,The Cave and indie mobile games The Big Big Castle and Scurvy Scallywags.

GARY WINNICK is an artist, writer, designer and art director. During his ten year stint atLucasfilm Games he co-designed and created all the art for their first graphic adventureManiac Mansion. Additionally, he created art for and art directed many other LucasArts games including Zak McKracken, Loom, Indiana Jones and the Last Crusade, Monkey Island and Habitat. Gary created the original property Defenders of Dynatron City, co-plotted a six issue mini-series for Marvel and served as a producer for the animated TV special. He was a co-founder of Lightsource Studios and Suddenly Social. His most recent graphic novel Bad Dreams is currently being published by comic company Red 5.

Just like they were on Maniac Mansion, Ron and Gary will be the core of the team building this new point & click adventure, co-designing and writing with Ron doing the bulk of the programming and Gary doing the art.  Good times.
An additional programmer and artist will be added 6 months into production, along with a part-time musician. Dedicated testers will join as the game nears completion.
We're fully devoting ourselves to Thimbleweed Park in the same way we did Maniac Mansion, Monkey Island and everything else we do. This is a serious full-time project for us. We want to make the best classic point & click adventure we can.

Follow and participate in the game's development on our website, where Ron, Gary and other members of the team will discuss behind-the-scenes art, designs, information, cooking, gossip, answer questions, get feedback and generally have a lot of fun*.

* Fun not guaranteed and void where prohibited by law.