Star Wars The Force Awakens Trailer To Be Shown Online. Lucasfilm To Break The Internet. 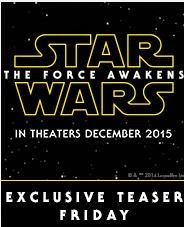 The official Star Wars Twitter feed tweeted something today that will hopefully calm down a lot of disgruntled fans over the showing of the latest trailer for The Force Awakens this Friday.

Fans were annoyed at learning initially that the trailer for the new Star Wars movie set to hit screens December 2015 was only going to be shown at a select few cinemas in the US causing some fans to contemplate driving hundreds of miles just to watch an 88 second trailer.

Now, thankfully that strategy has changed thanks to the tweet below:

The Force is with you on #BlackFriday when #TheForceAwakens teaser hits @iTunesTrailers.
— Star Wars (@starwars) November 26, 2014

In fact if you head over to the website for Itunes Trailers you will see they have already put a little logo up showing the trailer coming this Friday (pictured above.)  Could Lucasfilm and Disney break the Internet? Have they done stress tests? Maybe that was their concern all along. We shall see.