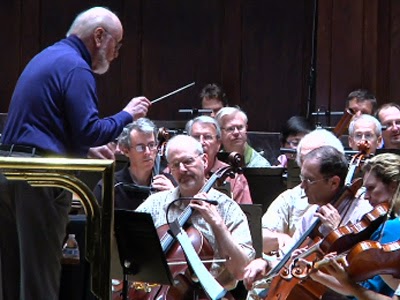 Saturday gone people of Detroit had a double treat as John Williams conducted the Detroit Symphony Orchestra at the Orchestra Hall.  Joining them on stage was long time friend, Steven Spielberg.

Projected on the large screen above them were clips from some of Spielberg's and Williams' classic such as Close Encounters and Raiders of the Lost Ark.  Accompanying the clips the DSO played signature tunes from each movie shown.

“If a movie can strike like lightning, then the score can be like thunder,” said Spielberg.  “I can direct bicycles to fly over the moon, but the music makes them fly.”


Spielberg and Williams were here as the star attractions of the DSO’s annual “Heroes Gala,” a sold-out black tie celebration that raised a whopping $1.25 million for the orchestra on Saturday. The 2014 honorees were Detroit businessmen Dan Gilbert and Matt Cullen, who played a key role in helping to mediate a settlement to the musicians’ strike three years ago and have spearheaded fund-raising efforts like the infamous Kid Rock-DSO collaboration from two years ago.

At one point during the evening a clip was shown of Indiana Jones and the Last Crusade with no music from John Williams.  “Let me show you how boring I can be without Johnny Williams,” said Spielberg.  Then the same clip was replayed with the famous John Williams soundtrack.  As Mark Stryker from Freep.com said:


from the scurrying winds and strings to underscore the chase to a witty percussive rattle giving life to a surprise cameo by a snake – added the coursing blood of emotion to the veins of the film.
Yet this scene also showed the brilliance of Spielberg’s filmmaking even without the music – his savvy pacing, the pinpoint timing of the jokes, the clever cuts and the subtle revelations of character. The scene was a unified whole without the score – as all movies must be – but it was so much richer and more magical with Williams’ music so perfectly attuned to the filmmaker’s aesthetic.


“John Williams is the last great film composer standing,  he’s really the only one left who truly knows how to write for orchestra, who knows counterpoint and the old Hollywood style – that sense of how to underscore a drama, which has been abandoned by younger composers.”