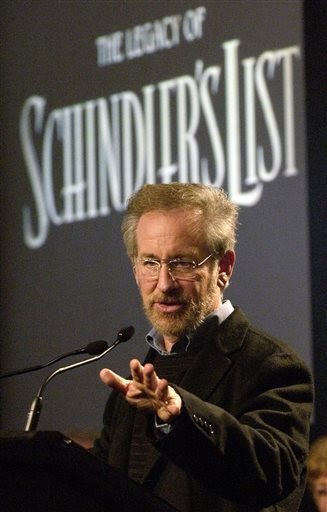 The foundation that Steven Spielberg founded after being inspired by Holocaust survivors he met while filming Schindler's List is marking its 20th anniversary this year.

The USC Shoah Foundation has collected the testimonies of 51,413 survivors in 34 languages from 58 countries - surpassing expectations Spielberg had when he created the foundation in 1994.  The scope of the foundation has grown to include those who have survived genocides in countries such as Rwanda, Cambodia, and Armenia.

The foundation hosts a searchable digital archive used both for education and outreach.  Spielberg himself visits schools so he can share some of the collected testimonies with young people.  Admittedly, at first they're more interested in discussing movies, but their focus shifts as those testimonies are presented.

Needless to say, that pleases Spielberg a great deal.

“It just restored my real faith in all these new generations that at the core of all of their values, everybody starts out as a good person,” he said. “(The testimony) reaches and presses the button of the decency in all of us. The decency, the compassion and the pro-action to want to make the world a better place. Not just in young people, in everybody.”

Spielberg has written a book commemorating the 20th anniversary entitled Testimony: The Legacy of Schindler's List and the USC Shoah Foundation.  It is due for release next week.

You can visit the USC Shoah Foundation for more information.