RV From The Lost World: Jurassic Park Sells For Less Than £10,000 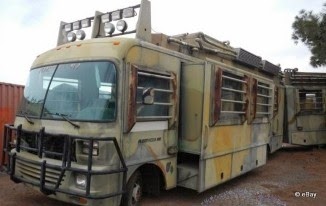 The vehicle was sold by Theme Park Connection - a specialist in buying and selling Disney movie props and memorabilia.

Based on a 1997 Fleetwood Southwind Storm, the motorhome and trailer was customised in to mobile lab for Ian Malcom, played by Jeff Goldblum, Sarah Harding (Julianne Moore) and Nick Van Owen (Vince Vaughn).
According to the eBay advert, the motorhome is "an authentic, original prop which was designed and constructed for the film".
It is one of several RVs made for the movie and is heavily featured throughout up until it the scene when it is pushed over a cliff by two Tyrannosaurus Rex - one of the film's most classic scenes.

This could have been yours!  T-Rex not included.