Pinewood Film Company To Expand To Wales UK. New Studio On The Way 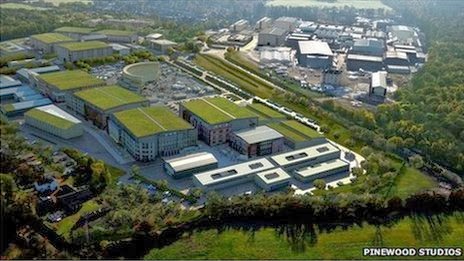 Pinewood Studios continues to expand and is heading to Wales, my neck of the woods.  In fact its just down the road from me.  Couple this with BBC Wales Studios creating gems such as Doctor Who and Sherlock and its clear to see that South Wales is becoming a Mecca for British made quality movies and TV.

The famous film company Pinewood is to set up a new studio in Cardiff.
Pinewood Studios Wales will be based at the former Energy Centre building in Wentloog and will form part of the company's global network.
The deal was announced on Monday by First Minister Carwyn Jones and Pinewood Shepperton chief executive Ivan Dunleavy.
The Welsh government hopes the 180,000 sq ft complex will generate an estimated £90m for the economy.
"Attracting such an iconic global brand as Pinewood is wonderful news for Wales," Mr Jones said.
"This high-profile investment is of significant economic value to Wales while the partnership between the Welsh government and Pinewood offers a priceless opportunity to promote Wales as a world-class location for film and television production."

Pinewood and Shepperton Studios have created more than 1,500 films in more than 75 years, including the James Bond franchise and the Carry On series.

The announcement has been welcomed by Hollywood star Michael Sheen, from Port Talbot, who described the deal as great news.

Read more and watch a video showing the building at this early stage over at the BBC News website.