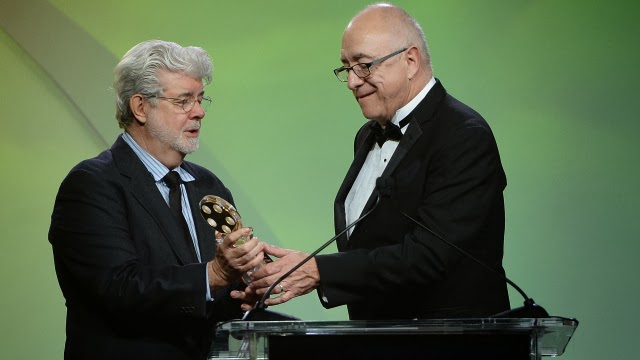 The MPSE Golden Reel Awards took place on February 16th and George Lucas was there to present a special award to Randy Thom. The MPSE awards honours Motion Picture Sound Editors and as George Lucas presented the award to Thom he had this to say about sound editors:


“the backs on which the entire film industry rests.”

Lucas presented a special award to Randy Thom.  Thom has been nominated for 14 Oscars, an Emmy, a Grammy, and has won two Academy Awards for “The Incredibles” and “The Right Stuff.”

Lucas used to call Thom the “sound Buddha” because for the first 10 years working together Lucas never heard him say anything.  “[Thom] just adds things in without having to question everything,” Lucas said.

“Gravity”, “Frozen” and “Captain Phillips” took home top awards in feature film, along with “The Great Gatsby” for best sound editing of music.

On the TV side. “Game of Thrones” took home nods for best sound editing in short form music and dialogue/ADR.