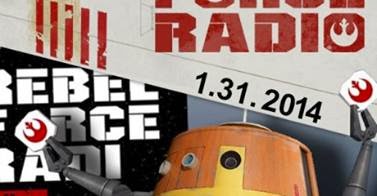 It's Friday, lets celebrate the weekend with a top notch new RebelForce Radio.  Our hosts are all over the new Star Wars Rebels and discuss the latest addition to the Star Wars universe, Chopper.

NEW SHOW! A new character from "Star Wars Rebels" has been announced! Hear what we think about the droid Chopper, what inspired his look and who he reminds us of. Also, Jimmy Mac reports about his trip to the Sundance Film Festival and the screening of the Roger Ebert documentary "Life Itself" which features voice work by "Star Wars: The Clone Wars" alum Stephen Stanton (Capt. Tarkin), including an exclusive interview with Stephen himself. Plus, we received a ton of feedback about the hot topics presented in last week’s show: The popularity of Han Solo and a potential Boba Fett reboot. You guys certainly let your opinions be known! All this along with the first winner of our Little Debbie giveaway, Key & Peele’s "Lando’s Fan", and the debut of “Jimmy Mac: Star Wars Vigilante”!