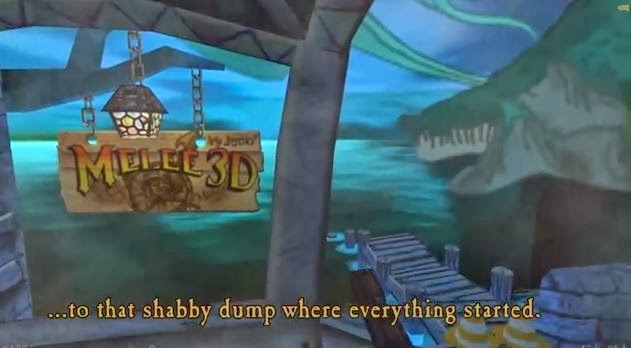 This 3D version of Melee Island created by Jochen Isensee was made using the ever reliable and mod friendly Half Life.  Jochen writes:

What a rush of nostalgia. Lately somebody reminded of the Half-Life Map i created from the Melee Island Town, that shabby piratedump in „Monkey Island". I rediscovered it in a 2004 backup of my website. Meanwhile this became a nostalgia double-feature, because the first part of Half-Life got ready for musuem as well as it has written computergame history too. Where are time-traveling not only back into the most charming caribbean adventuregame ever but also into a time when brushwork and polycount where everything while creating Half-Life Maps whith Valve's Hammer Editor 3,2. Here you can hang around in the Scummbar, pay a visit to the church, the prison and do some side-seeing in the servers beyound the dead end which we have encountered in the „Le Chuck's Revenge for the first time. And it there has never been such a freedom of movement before!
Download the Monkey Island Half-Life Map on my website
http://www.jooki.de/melee3d/
It comes with a model of Guybrush by Croc hunter. And the excellent old school Soundtrack "PC Speaker Ragae Remix" of the Youtube Trailer is done by Sebastian Steger.


Check out the video of the island in glorious 3D by putting the pulley you have in your inventory into the rubber chicken.  Then take it across the water to the other side.  Then....or you can just click below