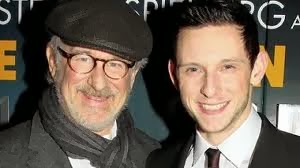 IGN recently caught up with Tintin star, Jamie Bell and got straight to the burning question.  Is Tintin 2 going to happen?

"It's being written," Bell said when asked if he'd read a script yet.


"It's weird," the actor contained. "I saw Steven [Spielberg] recently, randomly. I bumped into him. I hadn't seen him for awhile, and we were talking. I asked him to sign a Tintin book for me to my unborn son and stuff, and we were talking about it. He was like, 'Yeah, it's happening. It's being written. As soon as Peter's back from Middle-earth, we're going to do it.'" So now I'm just waiting."

Tintin 2 has been delayed due to Peter Jackson's love affair with Hobbits.  News on the story has been considerably rare.  Hints from Kathleen Kennedy, the producer has hinted at the story being adapted from The Calculus Affair.  Jackson has also mentioned a story, Destination Moon and Explorers of the Moon.  I like the sound of that one - Rob