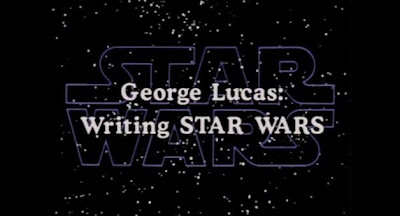 Check out this recently unearthed video from the official Star Wars Youtube channel.  George Lucas talks about the tasks of writing Star Wars.


This recently unearthed George Lucas interview covers the evolution of the first Star Wars script. Lucas, writer and director of Star Wars: Episode IV A New Hope, says that his original screenplay was "way too big to make into a movie." He took the first third of his script and used that as the basis for what would become Episode IV. In the process of rewriting, he decided that Ben Kenobi was not necessary for the story after his duel with Darth Vader; in the original version of his rough draft, Kenobi lived, but Lucas realized it would be more interesting if Vader was to kill him, and Kenobi could take another form. After the success of the film, Lucas had to make other changes to the overall story. In the original concept, the Battle of Endor from Return of the Jedi was meant to take place on a Wookiee planet. Since Lucas had established Wookiees as being mechanically inclined by making Chewbacca an able co-pilot to Han Solo, he felt he could not use them for the final battle; thus, Ewoks were introduced. Similarly, since Obi-Wan Kenobi was killed, Lucas needed another Jedi Master who could train Luke Skywalker. This led to the creation of Yoda for The Empire Strikes Back.