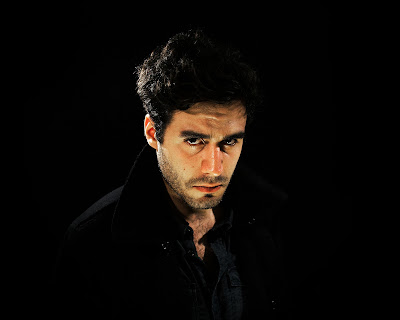 In our final week of featuring cast members from the upcoming film, Creditors we have not only a cast member from the movie but the director of Creditors too, Ben Cura.

You have the opportunity to get involved with the movie by backing their campaign over at http://www.kickstarter.com/projects/1913997996/creditors-the-film. They are giving away some great rewards depending on what you pledge, from badges all the way up to being a producer of the show and even a credited actor's position.

"Creditors" is the story of a love triangle, which finds itself unraveled when an American painter, Freddie Lynch, whose career and marriage are in decline is approached by an admirer, Grant Pierce, in a secluded hotel on an island in England and eased into making sense of his troubled relationship with his wife, writer Chloe Fleury.

Lets get the quick fire questions under way.
You're stuck in a swamp on Dagobah.  What one movie, TV show, album and book would you take?
Movie: Back to the Future (The Trilogy)
TV show: Louie
Album: LucasArts’ The Curse of Monkey Island’s OST
Book: La Première Gorgée de Bière by Philippe Delerm

If you could invite any three people (alive or not, fictitious or not) to a dinner party, who would they be?

What is your favourite John Williams soundtrack?
Memoir's of a Geisha

If you were invisible for a day what would be the first thing you would do?
Probably naughty things.

When was the last time you cried?
This is a little banal, but I finished playing Beyond Two Souls on the PS3 yesterday and there was some welling up there. The game is heavily about loss, so it’s bound to affect you at some point.

What is your biggest fear?
That the people I love won’t ever truly know how much I love them.

What was the most embarrassing moment of your life?
I mistook a friend I had known for years for another friend I had known for years, for a good 40 seconds whilst saying goodbye to her. The husband of the friend I mistook her for was standing next to me, quietly enjoying the ridiculousness of the situation. They didn’t even look the same, and I swear I had only had one drink.

Excluding search engines, what three website would you choose if no other websites were available?
Alright let’s think about this. There is no internet. Just three websites, right? So you can only need three things.

Information (or mis-information, with a side of FOMO): Facebook. Also great for stalking people.

Then you need something to keep you entertained. The BFI hasn’t launched its classic movies streaming app yet, so I’d go for Netflix.

And then, of course, there’s self-loving. We all have our favourite go-to website, so I won’t list it here.

Do you have any guilty pleasures?
To sit down and do something mindlessly. It’s sometimes a pleasure, and it definitely makes me feel guilty to find pleasure in not using my mind.

What are you looking forward to the most in the next six months?
I can only think in short increments of time. Right now, it’s lunch.

What is your most treasured possession?
Do we really like, own, anything, man?

What are you most proud of?
I’m proud of other people’s achievements more than my own. I guess I have work to do in that regard.

This is starting to sound more like a psychological evaluation than an interview.

What is your favourite Spielberg movie?

Robin Williams. Bangerang. Rufio. Phill Collins’ cameo. The “There you are Peter” kid. The movie is made of magic.


Where can people keep in touch or follow you?
We’re running a Kickstarter campaign until November 17th for our adaption of Strindberg’s play Creditors.

You can become a part of it here: http://www.kickstarter.com/projects/1913997996/creditors-the-film - every donation counts.

Thanks Ben for answering our questions.  Be sure to check out the campaign for Creditors and get involved too.