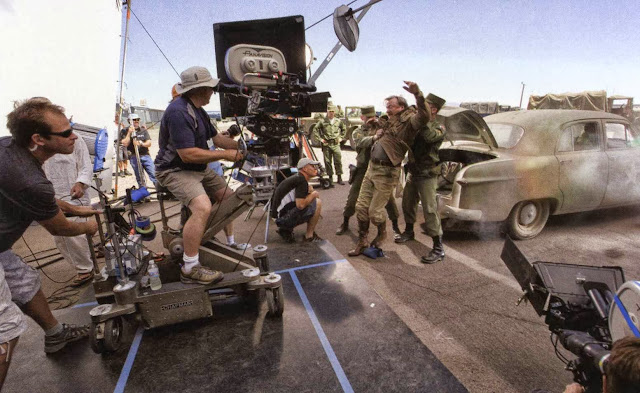 Personally I didn't mind the fourth Indy movie.  I feel I'm in the minority though.  Even Spielberg it seems is apologising for some of the decisions in the movie.  Every one remembers the "nuke the fridge" scene where Indy climbs inside a lead lined fridge to escape the blast of an atomic bomb test.  Admittedly it wasn't everyone's cup of tea including its director.


I know in Indy 4, you didn't buy the refrigerator and the atomic bomb... I know! I know! But we tried! We tried! I was pushing the envelope! By the way, I take full responsibility for that -- that was completely my idea! Even Harrison said to me: 'Nobody is going to buy this!’

I find it strange that this one scene is focused on and not others.  I love the Indiana Jones movies for what they are.  Adventure movies mimicking the old fashioned Saturday morning black and white adventures shown in the local cinemas of the 30's and 40's with over the top action, comedy and lovable characters.  I wonder why though, other scenes are not highlighted by fans such as the plane through the tunnel, Indy and co jumping out of a plane in an inflatable raft, a thousand year old knight, hitching a lift on a submarine and more?  These are all scenes loved by fans but when it comes to the fourth one it seems the in thing to rip it to shreds.  Are we getting too cynical in our old age?