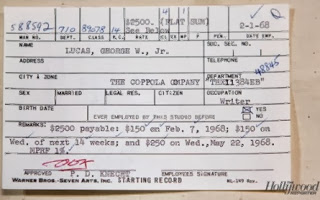 Thanks to Jedi News for bringing this to our attention.  This is a payroll invoice showing the wage George Lucas was getting from Warner Brothers during his THX-1138 days.  Amazing to see the famous director was only getting $125 a week at one point.

Lucas first joined Warners' payroll when Francis Ford Coppola brought his friend on board as an assistant on 1968's Finian's Rainbow. Studio payroll memos highlight how Lucas was getting paid $110 a week and was even bumped up to $125 per week.
Warners' internal memos between executives highlight the young Lucas' interest in sci-fi. A year later, Warners came aboard to distribute Lucas' THX 1138, paying him $2,500 in installments.