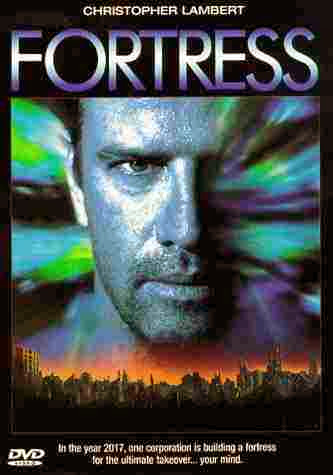 Fortress is one of those films I've seen dozens of times and somehow never tire of. It's the type of movie you can just put on and get lost in without having to invest too much energy in to follow.

A prison/escape movie set in a future (2017) where the US population has grown so big that they have had to introduce a "one family one child" rule to control it.
Ex-soldier John Brennick who is played by The Highlander himself Christopher Lambert is arrested for trying to smuggle his 2nd time pregnant wife into Canada after they lost their 1st child. 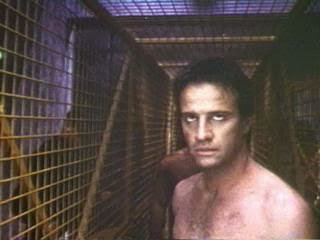 Sent to a corporately run prison operated by cyborg guards led by the Prison Director (Robocop's Kurtwood Smith) and a super computer called Zed-10. No one has ever escaped the Fortress but it has never tried to hold anyone like John Brennick, the most decorated Black Beret in US history before either. Concocting a plan to escape the facility and take his wife and unborn child to Mexico John is forced to enlist his cell mates to perform an A-Team style mission.

On the surface, Fortress appears to be just another low budget action vehicle for Lambert until you factor in the the director Stuart Gordon's fine sci-fi pedigree having directed such classics as "Re-Animator" and "Robot Jox" and writing "Honey, I Shrunk The Kids". Fortress may not be as groundbreaking or as adventurous as some of his other works but as a complete film I think its as good as any of his others. As usual Christopher Lambert makes a believable and likable action hero along the lines of a low budget Clint Eastwood or Harrison Ford.

Despite its slasher movie style ending which features the type of plot twist we could expect to see before M.Night Shyamalan came along. As far as prison movies go its more Escape To victory than The Shawshack Redemption or Papillon, hardly Oscar material but a thoroughly enjoyable action movie none the less.