My Relationship With The New Star Trek 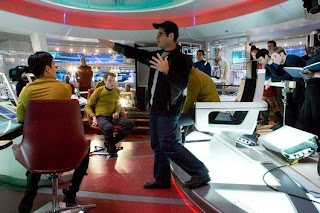 As an avid Star Trek fan since the Eighties I have enjoyed some of the greatest moments of the franchise, from the classic episodes of Star Trek The Next Generation such as Best of Both Worlds and Chain of Command, to Deep Space Nine and the Dominion War.  It's safe to say that Star Trek has produced some of the finest science fiction I have ever seen.

Not only have I used Star Trek, and in particular Deep Space Nine, as my virtual comfort blanket. The series has seen me through some difficult times over the past few years as its served as my go-to escapism if I need to unwind the world around me for an hour or two.

So I care very much about Star Trek and where its headed and is heading.  I remember being incredibly disappointed when I learnt that Enterprise was to finish after season four back in 2005, just when most people thought it was getting good and finding it's feet.  I, for one, thought the series was good from the start and could easily see the potential of this prequel show.   I thought Star Trek was dead.  The last movie, Star Trek Nemesis bombed at the cinema and even for me I found the viewing to be an ordeal.

So Paramount's big franchise was dead Jim.  Hopes of another movie were dashed when a source close to Star Trek creator Rick Berman said at the beginning of 2006 that the best way to make a good Star Trek movie was to leave the franchise alone for a while.  "The best way to achieve this is to take it away for a few years and then bring it back and do it right. The franchise needs a totally new creative team, some time off, and a cool new approach."

But just a month later it was announced that a new Star Trek movie will be made and will be a prequel to the original Star Trek series, featuring younger versions of characters like James T. Kirk and Spock. The movie will chronicle events such as their first meeting at Starfleet Academy and their first mission into outer space.  Shortly after it was also announced that Lost creator, J.J. Abrams will be the director for the new Trek movie.  I was currently enjoying Lost on TV and thought the choice for director was a good one.

For me, 2009 couldn't come fast enough, and when the release date finally arrived for Star Trek I had booked the day off and was first in the queue.  Initially I was disappointed with the movie.  I felt cheated and swindled.  How could they just discard the time line like that?  All these years of enjoying Star Trek with such three dimensional characters, a galaxy filled with so much Star Trek and they just toss it aside.  I know, a lot of people thought it was clever having an alternate time line but not me.  I felt it was lazy, dumbed down and not aimed at Star Trek fans.  I wanted nothing to do with it.

Of course the movie was a success and casual movie goers as well as Trek fans were going to the cinema to watch the return of Star Trek to the big screen.  Paramount and Abrams had achieved what they had set out to do, make Star Trek trendy and appeal to the masses.

Then the movie came out on DVD and of course I gave in and bought the movie.  I watched the movie a second time and our relationship got a little better.  I decided to brush aside the little time line thing and enjoy the movie as just that, a movie.  NOT as a Star Trek movie but as a science fiction movie.  I still felt disappointed but at least it was Star Trek (to some degree.)  People were talking about the franchise once more which was a good thing.  Eventually, and inevitably Paramount announced a sequel.  Once again J.J. Abrams would be at the helm.

Fast forward to 2013 and Star Trek Into Darkness hits the big screen.  Once again I was there on opening day for the first showing and came away having enjoyed the movie for what it was.  Not as pure Star Trek but as a pop corn science fiction movie.

I've come to accept that these new Star Trek movies are what they are.  They are dumbed down and that's not me thinking that.  J.J. Abrams said himself back in December 2012:

"This movie was not made for Star Trek fans — it was made for movie fans, but if you’re a Star Trek fan, I think you’ll be really happy. There’s a lot of stuff in here for you. But we couldn't just make the movie just for fans of Star Trek."

So there you have it.  I could moan about the new Star Trek movies not being Star Trek but back in 2005 the franchise was dead and it didn't look like there was any way back.  Here we are in 2013 and Star Trek is alive.  It may not have everything us Trekkers want, but it's alive and being talked about and debated on the web and in the media. In fact a third instalment is already on Paramount's agenda.

I recently compared the new Trek movies to a beer.  What I mean is, imagine walking into a bar and the only beer available is a generic watered down foul tasting beer.  You drink it anyway as there's nothing else on offer but as you do, you remember that fine ale you had a while back that was full of body, depth, strength and taste.  It wasn't to everyone's taste but man did it have a kick!