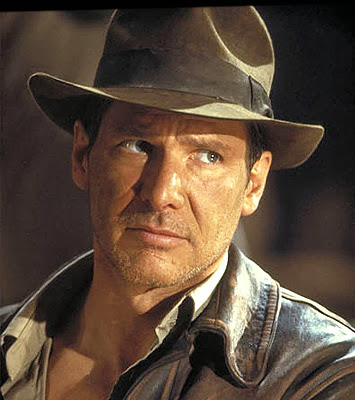 Most people know me as an unabashed Star Wars fangirl, but I do have other passions. The Indiana Jones franchise is one of those things I love. So much so that I convinced my parents on a trip to Hawaii that we needed to take a specific excursion for the sole reason of visiting one of the filming locations.

As a writer you learn to draw from your favorites. Reviewing my manuscript for my first novel Wynde, I realized stories and characters that made the biggest impression on me personally show up in unique ways. In Wynde, I have a character who has the look of an “adventuresome archaeologist” – which he’s not. Still, I imagine many of my readers will catch the reference and draw a similar imagery – a Doctor Jones-ish fellow – in their mind’s eye. Tying your own imagery to something familiar to the audience is one of the things I learned from George Lucas. When I watched the Indiana Jones marathon over the weekend, I was reminded that I had taken a few lessons from the Lucas-Spielberg brain trust, as well. Here are the five most important things I learned from Indiana Jones:

There’s no denying that the movies are joyous romps, some maybe more than others. Still, the sense of fun radiates from the screen in how Lucas and Spielberg as storytellers dared the movie and its characters to be brave and carefree. Over the years I’ve paired up with other writers, and the collaboration has always pushed me to grow. Having fun doing the tough stuff – creating – helps keep the muse fresh, too.


#2 - The best stories are about relationships.

My favorite Indiana Jones movies are Raiders and Last Crusade, and what sets those two movies apart are the relationships within them. The romantic spark with Marion, the father-son dynamic, and the friendships with Sallah and Marcus make Indy relatable.

Who can’t hum the “Raiders March” on cue? And as it’s wafting through your mind now that I’ve brought it up, an incredible movie memory is not far behind. All hail, John Williams!

It’s not just the relationships that make Raiders and Last Crusade standouts, but also the lore. Quests for the Ark of the Covenant and the Holy Grail have permeated myth and storytelling for centuries, which made those stories accessible. The concepts in Temple of Doom and Crystal Skull
weren’t nearly as recognizable in the public consciousness, and the stories had to work harder to get the audience on board for Indy’s personal quest.

Probably one of the most memorable Harrison Ford improvisations is Han Solo’s line “I know” to Princess Leia’s “I love you” in The Empire Strikes Back. Really, though, it’s Ford’s simple shoot the swordsman in lieu of complicated fight sequence that serves as a reminder that the most important rule in storytelling is to KEEP IT SIMPLE. When I get stuck on a story point, it’s often because I was trying to do too much. And if I’m stuck as the storyteller, it’s quite possible the plot point will drag for the audience too. Often I find the solution to unsticking the story is to get back to basics.

FANgirl Blog creator Tricia Barr writes about Star Wars for Random House’s science fiction and fantasy blog Suvudu.com and Star Wars Insider magazine. She is putting the finishing touches on her first novel, Wynde – a military science fiction with a fantastical twist. For excerpts and tales of her adventures in creating a fictional universe, hop over to TriciaBarr.com. For updates on all things FANgirl follow @FANgirlcantina on Twitter or like FANgirl Zone on Facebook.