Guest Post. Mark Newbold - Five Things I Learned From Back To The Future 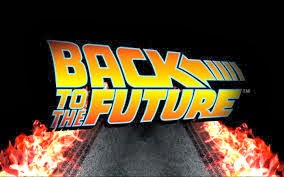 With a galaxy as massive as Star Wars it's easy - all too easy - to be known only for that one thing and as a long-time inhabitant of the galaxy far, far away I'm cool with that. But my love of sci-fi and fantasy bleeds beyond the SWG and into other regions of the universe.  Star Trek, Marvel and DC and the many and various projects Stephen Spielberg has touched.

One of those magical projects is 1985's Back to the Future, a timeless (pun intended) classic executive produced by Spielberg that in its 116 minute running time manages to create a world that we would want to live in, with tips of the hat to classic sci-fi, framed around the year 1985 which is now almost as long ago to us as 1955 was to the makers of the film back in the mid 80's.  As it gets older, the nostalgia factor increases year on year (and don't forget, in 2 years time we arrive at 2015 with Jaws 17 and hoverboards.  Can't wait!)

So, here's my list of the 5 things I learned from Back to the Future.  You may well have learned very different things, it greatly depends on how much attention you paid to your Mom's high school photo...

Stand Up For Yourself:  In the first movie, young George McFly is a well-meaning, decent fellow who gets sand kicked in his face at every turn and as such never gets a shot at the girl he adores.  Biff Tannen muscles in and later - in an awkward turn of events - his own time-challenged son Marty becomes the target of Lorraine's affections.  As the film winds to a close and with Marty's help he becomes the man that he always wanted to be.  Back to the Future shows that nothing is given, it's earned.  Like real life really. 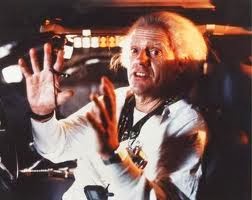 Crazy Old Men With DeLoreans Can Get You Into Trouble:  Not that I know too many crazy old men with vintage sports cars that can rip through the fabric of time and space at 88MPH, but surely the message learned here is don't get into cars with strange people?  Or is it don't judge a book by its cover?...No, I got it.  Don't ever piss off Libyan terrorists in a parking lot.  Or steal their plutonium.  But if you DO, make sure you're with a crazy old man in a DeLorean.

Nothing Is Impossible:  See number 2, a crazy old man made a time machine out of a Delorean.  Nervous, sci-fi loving George gets the impossibly hot girl.  Marty got away with calling himself Clint Eastwood.  There are so many paradoxes at play in the trilogy it's a wonder anyone ever got born after Marty returned to the present of 1985, but that's kind of the point.  In the infinite universe we inhabit anything that can happen WILL happen, and so while it's crazy to think that the actions of Doc, Marty, Lorraine, George and everyone else didn't irretrievably change the timeline (as it did in Back to the Future 2) it's also a miracle that things pretty much got put back to normal by the end of Part 3.

Don't Rise To It:  If someone called me a chicken, eh, what the heck.  I just assume they have bad eyesight, but in the Back to the Future universe, calling someone a chicken is a cue for reckless actions, crazy chases
and diving in head first.  Sure, no one likes to be called a bad name, but take a step back.  Surely it says a lot more about the person doing the name-calling than it says about you.  Unless what they say is true, of course...

The power of love.  Huey Lewis said it, so it MUST be true.  Right through the trilogy, the power of love - parental love, the love of friendship, marital love - powers the films and give us that added weight of importance as we know the characters in the film are vital and treasured to each other.  It makes the Back to the Future trilogy one of the most consistent series of films out there and 28 years on keeps them high on people's lists of most-loved films.  And after all, the power of love IS a curious thing.

Mark Newbold has written for the Star Wars Insider since 2006, is a regular contributor to the Official Star Wars Blog and back in 2006 wrote an article for Model and Collectors Mart on the collectibles of Back to the Future (http://www.jedinews.co.uk/news/news.aspx?newsID=1155).  He's the Daily Content Manager for Jedi News, the UK's biggest Star Wars site and is about to launch the new Jedi News podcast.
THE BEARDED TRIO ON FACEBOOK
THE BEARDED TRIO ON TWITTER
THE BEARDED TRIO ON GOOGLE+