Rumour Alert: Star Wars VII May Be A December 2015 Release 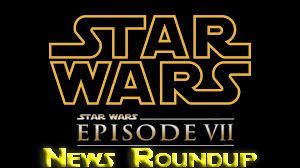 As sure as the sun rises each day we can also be sure of yet another Star Wars rumour and today is no exception.  Another "various sources tell us" story.  This time Baddassdigest.com is reporting that Star Wars VII may be pushed back to December 2015 from the original May release.  This would take it out of the epic fight we are likely to see in the summer of 2015.  Avengers Age of Ultron, Assassin Creed, Terminator, Jurassic Park IV, Independence Day 2, Pirates  5 and more (Avatar 2, Batman vs Superman) all fighting for the top spot through out the summer.

Now I have no doubt that Star Wars VII could easily hold it's own against these titles but moving the sequel to December would seem like a good idea.  More time for Abrams and co to work on the movie plus at this moment the movie would only have to contend with Alvin and the Chipmunks 4, Inferno and Kung Fu Panda 3.  What a difference a few months makes.

Anyway the story is just a rumour at the moment but if true I have no issues with Star Wars VII being pushed back to December.  As they say, all good things...

check out the story at Badassdigest.com which is actually a great site