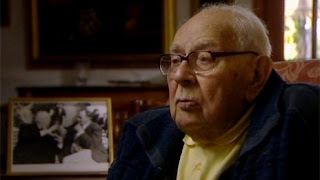 On the same day that we bring you the news that Cinematographer Daniel Mindel is to work with J.J. Abrams on Star Wars Episode VII, we also have to bring the sad news that cinematographer for the first Star Wars film has died age 99.  Gilbert Taylor had an incredible career and also worked on many other notable movies including The Dam Busters, Dr Strangelove and The Omen.

His time on Star Wars was not plain sailing.  In his own words he said in a recent interview with American Cinematographer magazine.

"George avoided all meetings and contact with me from day one," Taylor would later tell

"So I read the extra-long script many times and made my own decisions as to how I would shoot the picture."

Taylor's distinguished career included six years with the Royal Air Force during World War II, shooting the results of night-time raids over Germany at the request of Winston Churchill.

He went on to become a founder member of the British Society of Cinematographers, which presented him with a lifetime achievement award in 2001.

Taylor also worked on television, shooting episodes for such 1960s series as The Avengers and The Baron.

Thanks Gilbert for making Star Wars look so good.  May The Force Be With You.