A Look Back At The Film, Crash and Burn. 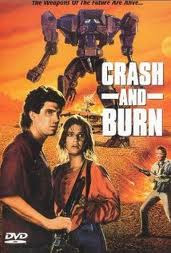 Crash and Burn was originally released as a sequel to the 1989 Action/Sci-Fi/Sports movie Robot Jox but apart from the name, director and giant robot there is very little similarity between the two.

Crash and Burn is a horror/sci-fi film set in a post apocalyptic world where computer usage is banned and a single organisation (Unicom) rules most of the world with an iron fist and some underhanded tactics, a group of people trapped in a rural TV station due to a passing thermal storm get caught up in a battle between members of the revolutionary Independent Liberty Union (ILU) and a crazed Unicom synth sent to spy on them.

Made on a small budget the special effects are far from bad but are nowhere near as strong as on it's predecessor. however by explaining that the station was built using materials salvaged from the nearby junkyard it allows the the use of lots of 20th century technology and props despite its futuristic setting, this of course reduced the costs of making the film whilst keeping it believable. Praying on the paranoia of the increased power and greed of giant corporations, of a big brother society and of technology turning bad the plot is driven by the actors and script rather than the need for cheap shocks and expensive effects.

The cast is made up of familiar 80s and 90s TV actors who you'll probably recognise but wouldn't know where from without a sneaky visit to IMDb or Wikipedia, the most famous of these are probably Eva LaRue who played Natalia Boa Vista in CSI: Miami and Bill Moseley who has become famous in recent years starring in horror movies such as The House of 1000 Corpses and Repo! The Genetic Opera.

As with most low budget horror and sci-fi films of the time (1990) there is a fair amount of gratuitous sex and nudity and although there is nothing particularly explicit it does at times feel a bit out of place, I'm far from a prude but it feels more like titillation to please a demographic tick box as opposed to it actually enhancing the plot/script.

Robot Jox may be the more popular and famous of these two films but I personally think that Crash and Burn is far superior, it may not be as flash but it has a better story and a stronger script. A great late night movie.