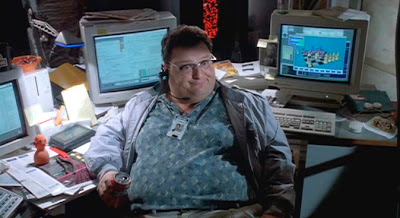 Wayne Knight was talking to a small group of media at Comic Con and revealed how he would like to get a part in Jurassic Park IV.

"It was a very big meal and a very small dinosaur," he said when toofab asked about appearing in the upcoming flick. "It was different from the book. In the book he crushes his head and all this kinda stuff. I'm thinking, why not play a one-armed guy with an eye patch? I could come back!"

Knight also reveals the moment when he found out he got the part in Jurassic Park.

"The biggest moment, best moment was getting cast because it was out of nowhere," says Knight. "My agent said, 'Are you sitting down? Steven Spielberg called, he wants to put you in Jurassic Park.' I didnt audition for it. I think he saw me sweating and staring closely at Sharon Stone [in 'Basic Instinct'] and thought, 'What if that were a dinosaur?'"