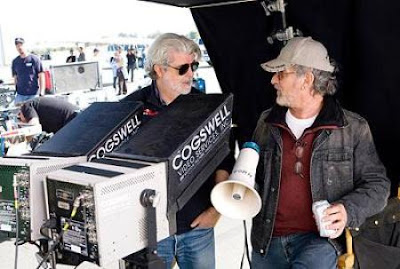 This Saturday, George Lucas and Steven Spielberg hosted a panel debate at an independent film festival the two had chosen to dedicate to themselves. At the event, the two highly praised filmmakers mostly talked about problems facing the world of cinema.

However, Spielberg and Lucas also dedicated a significant chunk of the event to talk about other mediums, expressing their skepticism to non-cinematic art forms.

“Other mediums are inferior to film”, Spielberg told the crowd, whilst Lucas nodded in approval. ”Many people are not aware that there are other mediums where the pictures don’t even move. Hell, some mediums don’t have pictures at all”, Lucas added, urging any potential art collectors in the audience to be wary of ‘incomplete films’, such as paintings and music.

When a member of the audience asked what the two filmmakers thought of video games as a form of art, Spielberg was keen to provide his insight on the games industry. “The problem with games is the controller. The second you get the controller something turns off in the heart, and it becomes a sport. Scientific studies on the human heart confirm this.”

Spielberg brought up the experience he gained from being the lead designer behind Boom Blox for Nintendo Wii. “Boom Blox was intended to be a moving story about a man who suffers from the untimely death of his wife, and who has to reconcile himself with the idea of love. However, once the game controller was involved, Boom Blox turned into a game about blowing up blocks that look like farm animals. This is why games can’t be art.”

Lucas noted that new technology like Microsoft’s Kinect, which would see the player losing the controller in favour of using body gestures, could help advance video games as an artistic platform. “When I first tried the Kinect I played in poorly lit conditions, so the device didn’t recognise all of my gestures. I got frustrated, then I started to feel upset, then angry. That camera made me feel. Now, that’s art.”

When asked if he had tried games like The Walking Dead, Journey and The Last of Us – games where empathy serves as a central aspect of the experience, Spielberg replied in the negative.
“No, I haven’t tried those games, but if they use a controller then they simply cannot be as artistic and daring as Indiana Jones IV.”