Quick Fire Questions - This Week We Have Vadergirl 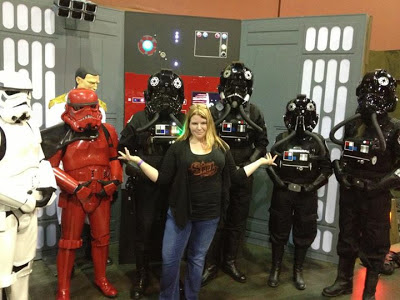 This week we have Vadergirl.  Vadergirl has a huge social media following on Facebook, Twitter, Instagram and Youtube.  Her Facebook page alone commands almost 12000 likes.  Wow!  In her own words Vadergirl says "I am a hard working single mother from Michigan who finds escape in the world of Star Wars and conventions.

You're stuck in a swamp on Dagobah.  What one movie, TV show, album and book would you take?
If I was stuck in a swamp I would take the movie "Tommy Boy".  My TV show would be Doctor
Who.  My album, Lucinda Williams "Car Wheels on a Gravel Road."  My book would be "are you there God it's me Margaret" by Judy Blume

If you could invite any three people (alive or not, fictitious or not) to a dinner party, who would they be?
For me it would have to be Richard Simmons, Carrie Fisher and Jesus

What is your favourite John Williams soundtrack?
Star Wars Empire Strikes Back although I would have to give an honorable mention to Jurassic park and Harry Potter.

If you were invisible for a day what would be the first thing you would do?
I would first shower then go out naked!!!!

When was the last time you cried?
Actually that would have been tonight at the dentist :,(

What is your biggest fear?
Failing as a mother and cats

What was the most embarrassing moment of your life?
When I was 15 and in drivers education it was my turn to drive, I turned the corner and waited and waited and waited for the cars to move. My instructor nor the other kids in the back said anything, they just kept quiet. After a good 5 mins I said "I don't understand why these cars are not moving" the instructor said "because they are parked" I did not realize the cars were parallel parked, I was humiliated

Excluding search engines, what three website would you choose if no other websites were available?
Wookieepedia, thinkgeek, Facebook

What are you looking forward to the most in the next six months?
oing to Chicago in August

What is your biggest regret? 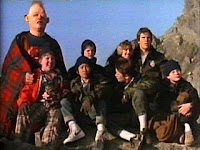 
Thanks for your answers Vadergirl.  Be sure to follow her on Facebook and her other channels.  Next week we have Indycast's Keith Voss.

Do you want to appear on our quick fire questions or know someone who should?  Email and let us know