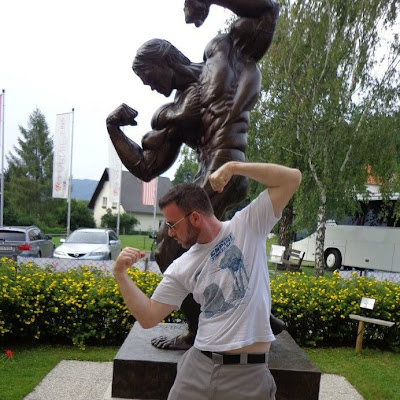 This week we have Indycast's Keith Voss.  Keith, an American living in Austria is a self confessed Indiana Jones addict and co-hosts "The Further Adventures of Indiana Jones" with Joe Stuber on the number one Indiana Jones podcast, Indycast.  Keith worked for a movie trailer company for ten years in New York and On top of all this he has also written two songs “High Adventure”, “The Tale of Short Round” and “The Fury of Darth Maul”.

With that lets begin the quick fire questions.

You're stuck in a swamp on Dagobah.  What one movie, TV show, album and book would you take?
I would like to take a movie I have always wanted to see, but have never seen before. If I like it, great, if not I have plenty of time to reflect on why I chose to bring that stupid movie with me in the first place. TV show hands down, would have to be “Robot Chicken”. The album would be Queen’s Greatest Hits, and as far as one book, “Ready Player One” by Ernest Cline because it has enough pop culture references in it to last me for a lifetime of re-visiting my childhood memories…or at the very least until I was rescued by the Rebel Alliance.

If you could invite any three people (alive or not, fictitious or not) to a dinner party, who would they be?
Rodney Dangerfield, Alfred Hitchcock and Johnny Knoxville. Just IMAGINE the possibilities.

What is your favourite John Williams soundtrack?
Indiana Jones and the Temple of Doom”. It’s the Williams score I have listened to the most, and as a kid, I would act out the movie while listening to the score. “March of the Slave Children” always gets me pumped!

If you were invisible for a day what would be the first thing you would do?
Sneak into the local DVD/Electronics store, wait until it closed, grab the biggest bag I could find, and then GO TO TOWN.

When was the last time you cried?
I was visiting the States just a few weeks ago for my cousins wedding, and broke down a bit as I gave my best man speech.

What is your biggest fear?
Oh, I’m afraid the deflector shield will be quite operational… when your friends arrive. Ok seriously, I’m like Spielberg and am terrified of heights.

What was the most embarrassing moment of your life?
After watching “The Gift” on a flight from NY to LA, I mentioned how much I thought it sucked to the guys in the “Spider-Man” editing room, completely forgetting that Sam Raimi directed it. Oh, and by the way, Sam Raimi was standing behind me WHEN I said it. Open mouth, insert foot.

Excluding search engines, what three websites would you choose if no other websites were available?
Ain’t it Cool News so I can read about upcoming movies, Amazon so I can buy the movies, then IMDB so I can rate and learn more about the movies!

Do you have any guilty pleasures?
How much space do we have here? Just to name a few of my MANY guilty pleasures, I absolutely love the “Daredevil” directors cut and “I Come in Peace” starring Dolph Lundgren. It’s such an awesomely bad movie, but there’s just something about those spinning CD blades that’s just badass!

What are you looking forward to the most in the next six months?
A trailer for Mad Max: Fury Road. Mad Max is my favorite trilogy of all time!

What is your most treasured possession?
This is constantly changing, but I would say right now it’s a piece of original artwork from Marvel comics “The Further Adventures of Indiana Jones”, given to me by the artist himself.

What is your biggest regret?
Never being able to beat “Berzerk” on my Atari 2600. Might be time to give it a go again. Thank you for bringing up that painful childhood memory.

What are you most proud of?
I’m most proud of my move to Europe. I packed up at 31 years old and made the move across the pond so my wife and I could be together, and I haven’t looked back since…

What is your favourite Spielberg movie?
Well, that honor goes to “Indiana Jones and the Temple of Doom”, but “Raiders of the Lost Ark” is probably the best film he’s made…It’s a toss-up.

Where can people keep in touch or follow you?
Besides hearing Joe and I talk about all things Indy on every IndyCast, you can find me on Facebook, or get in touch at:  Thefurtheradventures@gmail.com

Thanks Keith for those great answers.  You can keep up to date with The Further Adventures of Indiana Jones on their Facebook page and of course the ever reliable Indycast on Facebook, Twitter and their website. 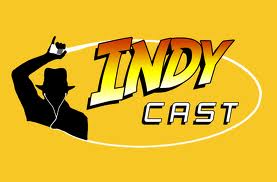 Next week we are honoured to have Full of Sith's Tha Mike Pilot answering our questions.