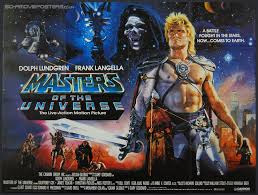 Growing up He-Man was my hero, I had the action figures (or dolls as my father would call them), I had the sleeping bag, I had a subscription to the comic book and my Eternian name according to my the Masters of the Universe fan club was Rogar (pron. row-garr).

Despite all this or maybe its because of all this I remember being unbelievably disappointed by Masters of the Universe the movie when I first saw it; "that's not He-Man!" I recall thinking.

My problem was never with He-Man the character, in fact I always liked Dolph Lundgren in the role but more with the fact that they omitted most of the main characters and set the majority of the film on earth.

There was He-Man and Skeletor, the Sorceress, Man-At-Arms, Teela, Evil Lyn and a cameo from Beast man but why not Mer-Man and Trap Jaw? Why not Stratos and Orco and Ram Man? What is the girl from the Dancing in the Dark doing in it? Most importantly though where was the mighty Battle Cat? The film does brush over most of these points with Man-At-Arms declaring to He-Man that he and Teela were the only ones left but that was never good enough for this fan club member!

Finally even at 8 years of age I knew the ending was a cop out!

Looking back at the film now I quite like it, I still stand by many of my childhood criticisms but I can now accept the film for what it is - a typical 80's slice of sci-fi.

I get the impression it was written as a generic sci-fi movie but the studio thought they needed a name in order to sell it, enter He-Man (or more specifically the Masters of the Universe as unlike the cartoon the movie doesn't actually bare the hero's name). 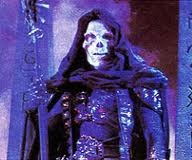 I'd summarise it as taking a fantasy universe and transferring it to America with an Alien encounter twist. Despite a gothic matt painting of Castle Grayskull at the start of the film all the interior shots look more like scenes from the Death Star, Skeletor's minions are reminiscent of the faceless emperial workers that are shown just as the Death Star explodes, Evil Lyn's henchmen resemble the bounty hunters hired in The Empire Strikes Back and Bill Conti's theme is very John Williams-esque.

Anyway enough whinging, this is a fast paced and exciting film that I think would have actually benefited from not having the Masters of the Universe baggage holding it back.

It has powerful imagery, some good special effects, well defined heroes and villains, a strong story and decent acting (by the main characters at least).

As mentioned earlier Dolph Lundgren plays the lead well, Frank Langella of Frost/Nixon fame manages to pull a performance out from behind Skeletor's mask, James Tolkan does his best Donald Pleasance impression as the meddling detective Lumic (Lumic/Loomis get it?), Courtney Cox isn't as annoying as you'd think and even Meg Foster is believable as the dastardly Evil Lyn.

If you watch this film expecting swordfights, kings and queens, magical lands and feeble alter egos you will be sorely disappointed but if you can ignore the fact that this is a tie in to the He-Man universe you may be pleasantly surprised, its far from original but its an enjoyable romp none the less!