CEII: Star Wars The Clone Wars Season 5 Out This October 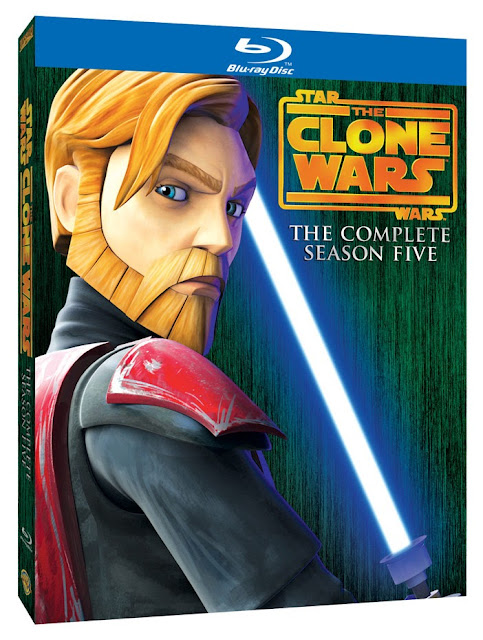 Finally!  This October we will get not only season five of The Clone Wars on Blu-Ray, but we will also get a seasons 1-5 boxset.  Packed with extras and two director's cut episodes with never before seen footage.

From the official Star Wars site:

Star Wars: The Clone Wars: The Complete Season Five, the final season of the hit series, will release on October 15, 2013, on Blu-ray (2-disc, $59.97 MSRP) and DVD (3-disc, $49.98 MSRP). The collection delivers all 20 episodes, two as director's cuts never seen on TV, and supplements them with a host of behind the scenes bonus materials, cast and crew interviews, and deleted and alternate scenes, revealing the magic behind the making of the cutting-edge series.

In its Emmy-winning fifth season, the gripping Star Wars story moves closer to the grim events of Star Wars: Episode III Revenge of the Sith and several major players face their destinies as the galaxy plunges into darkness. Planets are rocked by revolution, ancient Jedi secrets are explored, and Ahsoka Tano -- the spirited Padawan so central to the series -- faces a major crisis that will change her forever.

For those wanting to relive every moment of the epic series from the beginning comes the Star Wars: The Clone Wars Seasons 1-5 Collector's Edition, also releasing on October 15, 2013, on Blu-ray (14-disc, $149.99 MSRP) and DVD (19-disc, $119.98 MSRP). All previous complete season sets have been collected here for the first time. With unique packaging, the Collector's Edition also includes a brand new 54-page Art of The Clone Wars booklet that showcases concept art from across all five seasons, with many pieces never before published

Trailer for Blu-ray out this October.