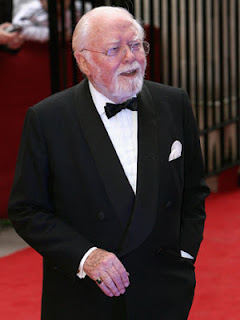 Steven Spielberg was among the famous faces honouring British icon Richard Attenborough at the launch of a young filmmakers fund created in his name.

Video messages from Steven Spielberg and actor Ben Kingsley were on the order of play for the launch of a National Film and Television School (NFTS) fund for young filmmakers named after British movie legend Richard Attenborough.

Attenborough, directed by Spielberg in Jurassic Park (1992), was the subject of a celebratory evening named the "Entirely Up To You, Darling" gala after his famous catchphrase.
Attenborough was personally unable to attend the dinner and fund launch, so his son Michael thanked the NFTS and those paying tribute on his father's behalf.
The charitable fund aims to raise $1.55 million (£1 million) over two years to "enable talented young people to achieve their ambition as successful filmmakers through world class educational experiences."
In his taped message, Spielberg described Attenborough as one of his "favorite people on the planet."
Said Spielberg: "He’s made some of the best movies of all time -- he made Gandhi! -- and has made such a contribution to society, to cinema and to everyone whose hearts he has touched with his words, works, his leadership and that divine inspiration that radiates from that wonderful smile."
The event Tuesday, closed to the press at the request of Attenborough's family, was hosted by Stephen Fry and also included guests Michael Caine and his wife, speeches from David Puttnam, the former Columbia TriStar chief, and a video message from former prime minister John Major.
It also included a live auction of donated items including a pair of glasses worn by Kingsley in Gandhi, costumes worn by Daniel Craig and Naomi Harris in Skyfall and a portrait of Attenborough by artist Bryan Organ.