By welshslider June 30, 2013
This week we have director, Erik Sharkey.  Erik is behind the much anticipated documentary on everyone's favourite movie poster illustrator, Drew Struzan.  Called Drew: The Man Behind The Poster, the documentary features interviews with Harrison Ford, George Lucas, Michael J. Fox and Steven Spielberg.

The Bearded Trio cannot wait for the documentary and we will keep you updated when the doc becomes available to watch.

Lets get straight to the quick fire questions:

You're stuck in a swamp on Dagobah. What one movie, TV show, album and book would you take?
The film ED WOOD by Tim Burton. The TV show Battlestar Galactica. The album Axis:Bold As Love by Jimi Hendrix. The Novel, The Rest of Us, by Jessica Lott.

If you could invite any three people (alive or not, fictitious or not) to a dinner party, who would they be?
Charlie Chaplin, Orson Welles, Jimi Hendrix. I would have to go with dead people if this was a real opportunity!

What is your favourite John Williams soundtrack?
Superman! Yes, I would pick Superman over Star Wars. I think it's that good.

If you were invisible for a day what would be the first thing you would do?
Sneak into a great concert and watch the band from the stage!

When was the last time you cried?
A couple of days ago. I guess I'm a sensitive artist.

What is your biggest fear?

That people won't come out to see my new film, Drew:The Man Behind The Poster, featuring Harrison Ford, George Lucas, and Steven Spielberg. I've spent the last four years making a doc about my favorite artist, Drew Struzan. So I really hope people want to check it out! I do realize that is a totally shameless plug.

Excluding search engines, what three website would you choose if no other websites were available?
The Nerdist, Ain't it cool news, The Bearded Trio.

Do you have any guilty pleasures?
Dancing alone to Duran Duran songs!

What are you looking forward to the most in the next six months?
The release of my film, Drew:The Man Behind The Poster, coming soon!!!

What is your most treasured possession?
A Drew Struzan original painting! 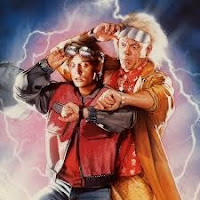 What is your biggest regret?
That I haven't learned to live without regrets.

What are you most proud of?
My new documentary about artist, Drew Struzan. I think I've done a good job honoring a true icon of illustration. I grew up on his iconic posters for Star Wars, Back To The Future and Indiana
Jones.

What is your favourite Spielberg movie?
That's like asking who my favorite kid is! But if I have to pick one, Raiders Of The Lost Ark.

Where can people keep in touch or follow you?
They can like the, Drew:The Man Behind The Poster, official Facebook page for updates! Yes, I'm a total whore for my film!

You can also check out the official web page for the documentary here.

The official trailer for Drew: The Man Behind The Poster


Next week we have E.T's Dee Wallace joining us