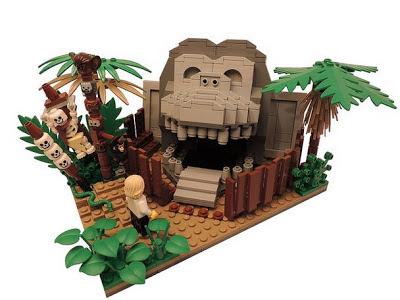 PuCCi0 over on Flickr has produced this impressive Lego monkey head from Lucasart's Monkey Island.

The Giantic Monkey Head is a notable landmark of Monkey Island. It has been featured in every game where the surface of Monkey Island is visited, each time serving a slightly different purpose. In the first game it leads to a hellish catacomb of flesh . Guybrush must make his way through these caves in order to reach LeChuck's ghost pirate ship.

The monkey head is surrounded by a fence that can be crossed only by pulling the nose of the totem pole, but for those not familiar with the game, the fence closes the door as soon as you release the nose. To solve the problem Guybrush Threepwood was able to befriend Jojo (a little monkey that lived on the island), luring him whit bananas, and he Showed Jojo how to hold down the lever which opened the gate in the fence surrounding the head and allowing access.